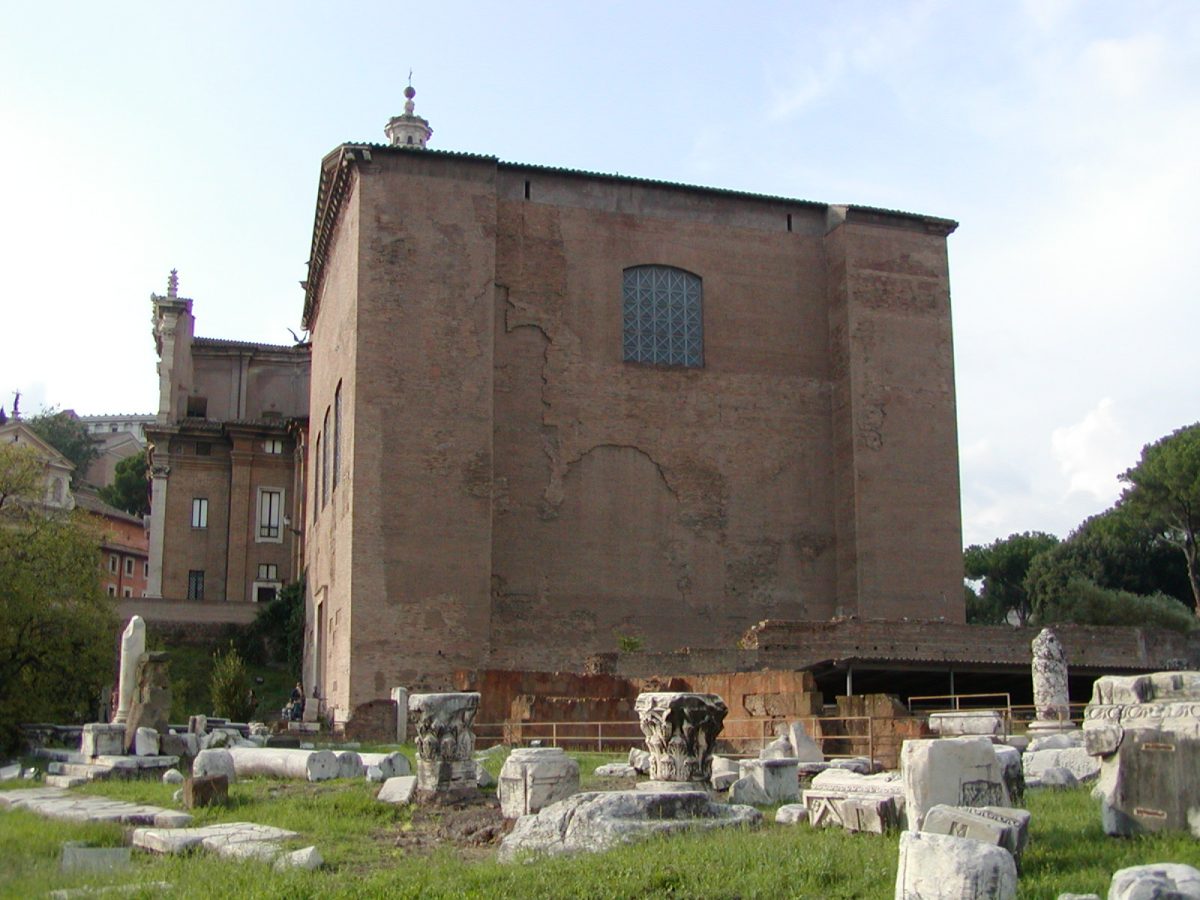 The Curia Julia in the Forum Romanum

Curia Julia in the Forum Romanum was the common meeting place of the Roman senate. It was built by Julius Caesar and was in use from c. 50 BCE.

The first Curia was called the Curia Hostilia, which was placed under the present Church of Ss. Luca e Martina. It was later reconstructed and enlarged in 80 BCE by Sulla, as the Curia Cornelia, only to be burned down during civil unrest in 52 BC.

Julius Caesar initiated construction of a new Curia Julia in the present location, which was finished by Augustus and inaugurated on August 28, 29 BCE. Augustus also built a portico, called the Chalcidicum, in front of the facade. The lines of holes in the facade are from the roof of the portico.

The Curia Julia was restored by Domitian after the Neronian fire of Rome in 64 CE. The fire of 283 CE that devastated much of the Forum Romanum, destroyed the Curia Julia completely, and the current building was erected by Diocletian shortly after.

The building is of brick, originally clad with marble on the lower half and stucco on the upper half. The ground plan is rectangular, measuring 18×27m and 21m in height, which are close to the proportions prescribed by Vitruvius for the Curie. In each corner the building has a projection aligned with the facades, one of which contained a stairway to the roof. The original roof was flat; the current is modern.

A flight of stairs lead the the central doorway. The current doors are copies of the originals from the time of Diocletian. The ancient doors were moved to San Giovanni in Laterano by the architect Borromini. The only sources of light inside are the three large windows above the doorway.

The inside is a single room, dominated by two lateral stepped platforms, used to seat the 300 senators. In the back of the room, between two doors, was the podium of the president of the senate. At one side of this is the base of the statue of Victoria, donated by Augustus and traditionally kept in the Curia. The marble paving is from the time of Diocletian, like the niches, originally with statues and flanked by columns surmounted by a tympanum.

The building, wonderfully preserved, owes this to the conversion into the Church of Sant’Adriano in the 7th century CE. The remains of byzantine wall paintings are from this period. The church was demolished in the 1930s and the building restored to its 4th century appearance.

The Curia Julia houses the Plutei of Trajan, two marble reliefs found in the main square of the Forum.

It is usually possible to see the Curia inside, though it is not always open.