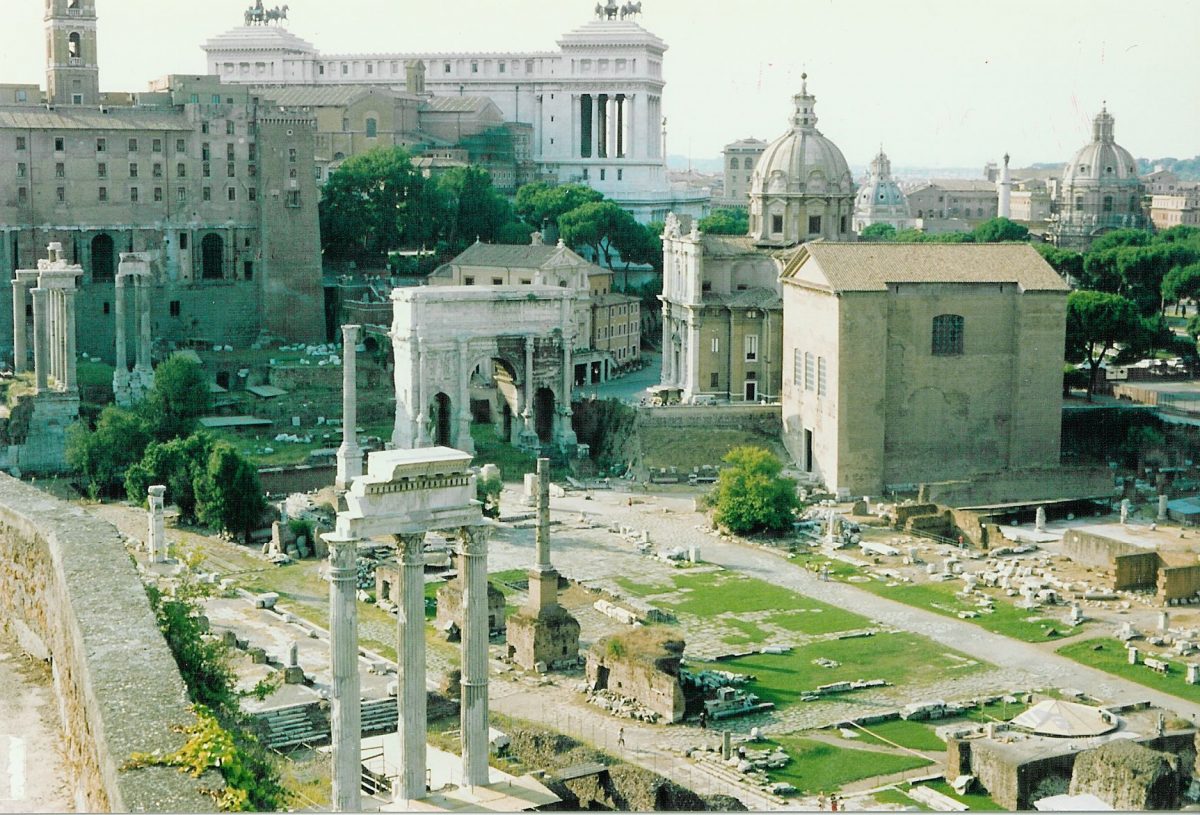 View of the Forum Romanum seen from the Palatine hill

The Comitium was the centre of political life in Rome during most of the republic. All major decisions were taken here.

The Comitium was the centre of all political activity in the Roman Republic. The senate met in the Curia, which was a part of the Comitium, and the consuls and other magistrates spoke to the Roman people from the Rostra, the speakers platform. Some of the most ancient monuments of archaic Rome has been found near or under the Comitium, such as the Vulcanal and the Lapis Niger, with the oldest known inscription in the Latin language.

Almost nothing of what remains of the Comitium is visible in the Forum Romanum today. The site of the Comitium was where the open space between the Arch of Septimius Severus and the Curia Julia is now, but most of the Comitium and related buildings and monuments were demolished in the late 1st century BCE when Julius Caesar and Augustus reorganised the whole Roman Forum.

The Comitium changed shape several times during the more than five centuries it existed. Excavations on the site have revealed no less than eight different layers of pavement, and at least four different arrangements of the Comitium.

The first level of paving is from c. 600 BCE, corresponding with the construction of the Regia and the pavement of the central square. Following a fire in c. 580 BCE that afflicted the Regia too, the pavement was redone, the first Curia Hostilia was built (ascribed by tradition to Tullius Hostilius, the third king of Rome, hence the name) and the Lapis Niger was erected, all in the period of c. 570-550 BCE. At this time the Comitium is a largely rectangular space, mostly aligned with the cardinal points, with the Curia Hostilia on the N. side (shown in green on the map below).

The Comitium was a templum, which was an area, normally rectangular and aligned with the cardinal points. It was determined and delineated by the official diviners, the augurs, as an appropriate location for drawing auguries, or omens, from the flight of birds. The Romans would take no important political or military decision without asking the gods for their consent, and the approval or disapproval of the gods was interpreted by the augurs by means of observing the flight of the birds over or near a templum. By meeting in a templum, the Roman elite and the gods decided together what was best for the Roman people.

The third paving of the area is from c. 500 BCE. At this time the first speakers platform, which would later be called the Rostra, was constructed. It was a rectangular platform on the S. side of the Comitium. The time coincides perfectly with the foundation of the Roman Republic, which tradition places in 509 BCE, and the appearance of the first speakers platform around that time has been seen as a confirmation of the tradition. The Law of the Twelve Tables were later published on this platform.

This Comitium is used for most of the early Republican period. A fourth level of pavement from c. 350-300 BCE indicates another restructuring of the area. The altar besides the Lapis Niger, the Vulcanal, is rebuilt. In 338 BCE the rostra, the beaks of ships captured in the Latin War, were mounted on the front of the speakers platform, thus giving it its name.

On the W. side of the Comitium stood the Graecostasis. It was a raised platform just like the Rostra, and it was intended for ambassadors from other nations, mostly Greek, attending the meetings in the Comitium or awaiting an audience with the senate in the Curia Hostilia.

The Comitium also served as the official clock of the city. The herald of the consul would stand on the stairs of the Curia Hostilia, and when he saw the sun precisely between the Rostra and the Graecostasis he would announce that it was midday, and when he saw the sun between the Columna Maenia and the Carcer, he would announce sunset. The hours of the day would be approximately determined from these fixed points in time. The Romans only learnt more accurate time keeping from the Greeks in S. Italy later. The first accurate solar clock was brought to Rome in 263 BCE from Sicily. (latin text Pliny NH VII, 60)

At some time between 300 BCE and 250 BCE the Comitium is completely restructured (indicated in blue on the map above). It was probably a result of exposure to Greek culture, that the Romans met in S. Italy and in Sicily during the First Punic War.

Both the Comitium and the Curia Hostilia were enlarged and the Comitium changed shape. The new Comitium was modelled after the ekklesiastéria found in Greek cities where it served a similar purpose. The new structure was circular, with internal steps all the way around a lowered central space. The participants of the meetings could be seated there while listening to speakers located either in the central space or on the Rostra, which still took up a part of the S. side. Also the Graecostasis remained in the same location just W. of the Rostra.

The Comitium maintained this form and size until the first century BCE.

The enlarged Curia Hostilia occupied almost all of the space now taken up by the Church of SS. Luca and Martina just behind the still existing Curia Julia. A piece of mosaic found under the church could be from the floor of the Curia Hostilia.

Sulla and the Curia Cornelia

During the century of civil wars that led to the end of the Roman Republic, L. Cornelius Sulla enlarged the senate from 300 to 600 members. The old senate building was too small to accommodate the increased number of senators and in c. 80 BCE Sulla had the Curia enlarged. This larger building is at times called both Curia Hostilia and Curia Cornelia, but it was basically a new building (shown in yellow on the map).

In the process the Greek style Comitium was demolished, as the new Curia Cornelia was moved forward compared to the old building. The Rostra and the Graecostasis were preserved, but the spaces used for tribunals in the Comitium were lost and the tribunals moved elsewhere. The area of the Comitium was paved with black slabs of stone.

In 52 BCE the Curia was burned down during the funeral of P. Clodius Pulcher who had been murdered. It was rebuilt shortly after by Faustus Sulla, a descendant of L. Cornelius Sulla.

Caesar’s Reorganisation of the Forum

Julius Caesar had great plans for a complete restructuring of the whole Forum Romanum, and this impacted the Comitium as well. Not all of Caesar’s plans were carried out before his death in 44 BCE, but Augustus finished most of it.

Caesar’s changes meant moving the religious and political functions of the Comitium to the main square of the Forum. The Rostra was moved to the main square, where meetings had taken place for some time due to the limited space in the Comitium. The Graecostasis was abandoned for good, and the Curia Cornelia was transformed in to a Temple of Felicitas.

An entirely new meeting hall was built for the senate: the Curia Julia, of which a later incarnation is still standing in the Forum Romanum. The Curia Julia was located to the SE. of the old Curia in direct connection with the new Forum Julium (Caesar’s Forum).

Due to the sanctity of the space itself the area couldn’t simply be reused for other buildings, so it was given a distinct paving and left open. This pavement was replaced during the reign of Augustus after a fire in 9 CE.

There is almost nothing to see in the area. Some parts are underground and a stairway leads down there, but it is usually closed to the public.