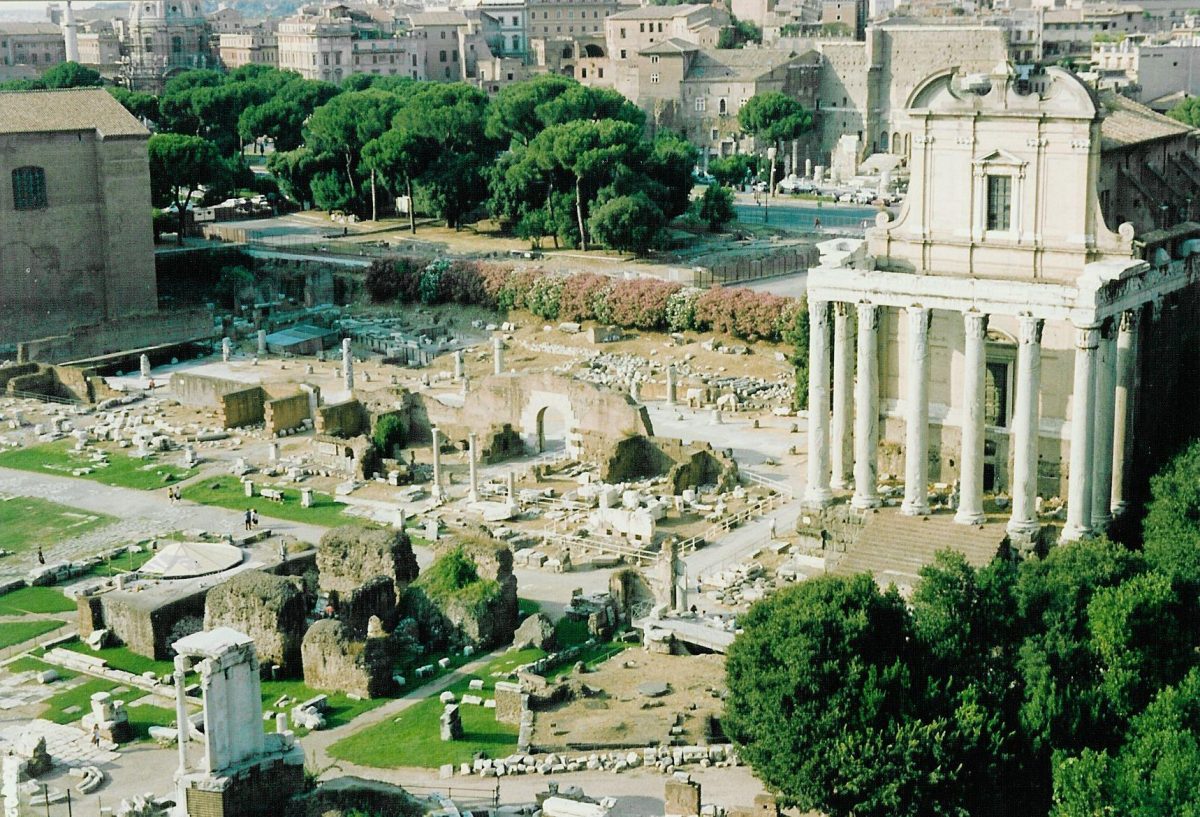 The Forum Romanum seen from the Palatine Hill

The Basilica Aemilia was the last of the republican basilicas built in the Forum Romanum, in 179~BCE by the censors Aemilius Lepidus and Fulvius Nobilior.

The Basilica Aemilia, or the Basilica Fulvia-Aemilia, was the last of the basilicas of the Roman Republic. It is located on the NE side of the main square of the Forum Romanum, between the Curia Julia and the Temple of Antoninus and Faustina.

The Basilica Aemilia was first built in 179 BCE by the censors M. Aemilius Lepidus and M. Fulvius Nobilior. In the following centuries it was actively maintained and improved by the gens Aemilia. The first complete re construction took place in the years between 55 BCE and 34 BCE, which incorporated into the building the series of shops, the tabernae novae, that stood in front of the basilica. The building was destroyed by a fire in 14 BCE and was rebuild by Augustus. A last restoration happened after a fire in 410 CE, following the sacking of the town by the Visigoths of Alaric.

The basilica had a rectangular plan, 70×29m, divided in four naves. The main nave was 12m wide, and was flanked by two aisles to the N and one to the S. This plan was maintained in all phases of the building’s history. The floor was of polychrome marble, of which some fragments survive. There were three entrances from the side of the Forum’s main square, in passages between the tabernae novae.

The Tabernae Novae was a line of shop on the N side of the main square of the Forum. There had been shops in this location before the construction of the first basilica, which was build behind the shops, but the current ruins are from the imperial period. The shops were used by bankers and money changers.

A two storey portico, consisting of sixteen arches adorned with semi-columns, was constructed in front of the tabernae novae during the reign of Augustus. It was probably a replacement for an older republican portico. The portico was named Porticus Gai et Luci after Gaius Caesar and Lucius Caesar, Augustus’ grandsons and designated heirs who both died young. After the destruction of the basilica in 410 CE the portico was replaced by a much denser colonnade.

A large inscription, with a dedication to Lucius Caesar, is placed near the SE corner of the building. This inscription, and fragments of another similar inscription dedicated to Gaius Caesar, probably come from the Parthian Arch, which was rededicated to the two brothers after their death. The Parthian Arch spanned the Via Sacra between the Basilica Aemilia and the Temple of Divus Julius, but nothing remains today. The arch was originally erected to celebrate Augustus’ recovery of the army standards that had been lost to the Parthians by Crassus.

A plaster cast of a frieze from the basilica have been mounted on a wall on the NE side (the original is in the Antiquarium). The fragment is probably from the time of Sulla and depicts scenes from the origin of Rome.

Traces of melted copper coins can be seen on the floor of the basilica. These coins have melted in the fire following the destruction of basilica in 410 CE.

Very little remain of the basilica. The floor plan is still visible and a few columns from the 410 CE restoration are still standing, otherwise not much is visible in situ. The abandoned building was used as a quarry in the Middle Ages and the Renaissance; the last parts were taken away around 1500 CE.

The area of the building is fenced off.