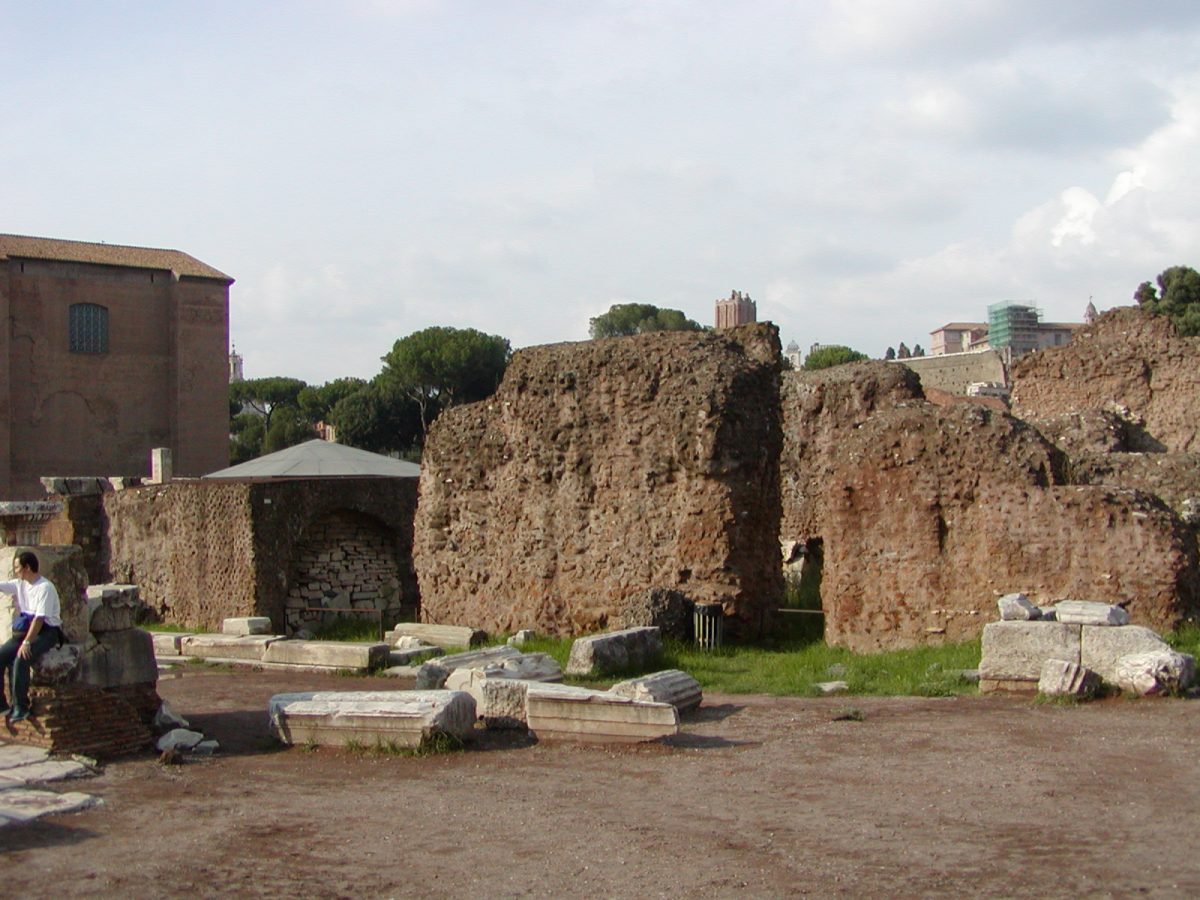 The Temple of Caesar was built and dedicated in 29 BC by Augustus to deified Julius Caesar, on the spot where Caesar's body was cremated.

The Temple of Caesar (Aedes Divus Iulius or Templum Divi Iuli) was built by Augustus after the senate deified Julius Caesar after his death. The temple was dedicated August 18th, 29 BCE. It stands on the E. side of the main square of the Forum Romanum, between the Regia, Temple of Castor and Pollux and the the Basilica Aemilia.

After Julius Caesar was murdered, his body was carried to the forum, near the Regia, which was his official residence as pontifex maximus. A funeral pyre was built and his body cremated. Initially a commemorative column was erected on the spot with a dedication to the “father of the fatherland”, but soon after Augustus started the construction of a temple for his adoptive father who the senate had declared a god. The temple was finished and consecrated in 29 BCE.

The temple was built in the Italian style. It rested on a tall podium in opus caementicium with access stairways on the sides of the temple. It was prostyle, hexastyle with two columns on the sides of the pronaos. No columns have survived but the temple was probably of the Corinthian order. In the front of the pronaos there was a semi-circular recess with a small altar inside. This might indicated the location of the funeral pyre. The protective wall in front of the altar was added later by Augustus.

In front of the temple stood a speakers platform, the Rostra Julia, decorated with the rostra (the beak-like prows of war-ships) from the conquered navy of Antonius and Cleopatra at Actium in 31 BCE. Very little remains of this platform, but it can be seen on the the Plutei of Trajan, two reliefs kept in the Curia Julia.

With the building of the Temple of Caesar the much older buildings of the Regia and the Temple of Vesta was excluded from the Main Square of the Forum. The temple was connected to the Basilica Aemilia by a portico dedicated to Gaius Caesar and Lucius Caesar, Augustus‘ nephews, and by the Arch of Augustus to the Temple of Castor and Pollux, often identified with Tiberius and Drusus. Together with the Basilica Julia and the Curia Julia this all made the whole of the main square of the Forum a massive demonstration of the political supremacy of the Gens Julia.

Of the original temple only the podium and the part of the front with the circular altar remain. Some fragments of decorative reliefs with Victoria and floral ornaments are on display in the Antiquarium.

Photo gallery for "Temple of Caesar"

Pages related to "Temple of Caesar"

Pages referring to "Temple of Caesar"