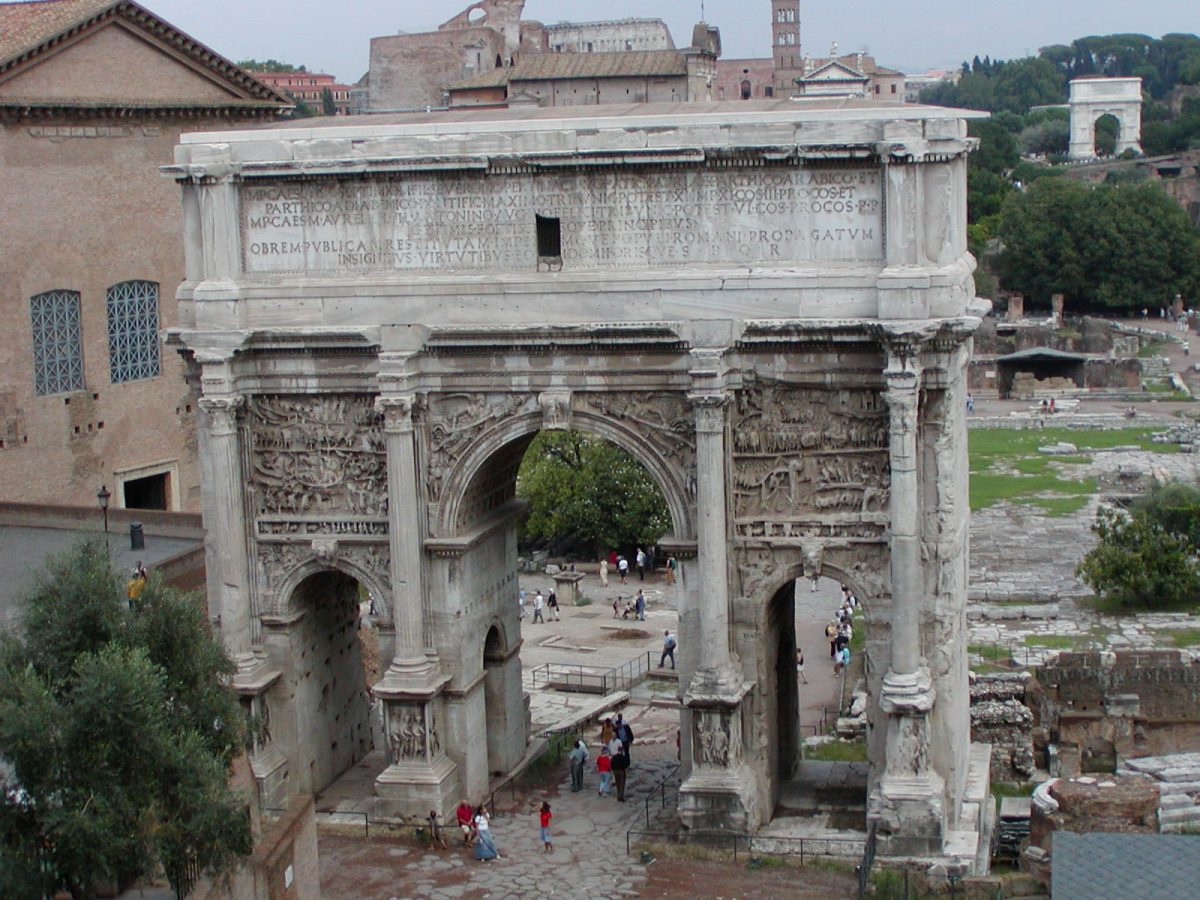 The Arch of Septimius Severus

The Arch of Septimius Severus (Arcus Septimii Severi) is a triumphal arch, erected in 203 CE to celebrate the victories of emperor Septimius Severus and his sons Caracalla and Geta in the wars against the Parthians and the Osroeni in 195 CE and 197 CE. It is located in the Forum Romanum between the Curia and the Rostra. It spans the Via Sacra on the route of the triumphal processions just before the ascent of the Capitoline Hill towards the Temple of Jupiter Capitolinus.

The Arch of Septimius Severus is a three way triumphal arch, measuring 20.88m in height, 23.27m in width and 11.2m in depth. It is build in brick and travertine, clad with marble slabs. The attic is 5.6m high with four chambers inside.

There are four detached fluted columns of the Composite order on both sides of the arch, standing on tall plinths. These columns are 8.78m high and 0.9m in diameter.

Roman coins show the arch topped by a quadriga (a chariot with four horses) with the emperors.

In general, the arch is very well preserved. In medieval times the arch was incorporated in part into a church and in part into a fortress. Some parts of the ancient arch have been lost through the centuries, such as the quadriga, but most remain. Many reliefs are, however, worn by time and pollution.

The Representation of the War

The common theme of the decoration is the wars in Parthia and the triumph celebrated afterwards.

The central elements are the four huge reliefs, each measuring 3.92×4.72m, placed above the lateral arches on both sides. They show scenes from the wars in Parthia. It is a continuous narrative, starting on the left side towards the Forum Romanum and moving rightward around the arch. Each panel consist of two or three registers, that are read from the bottom up.

The first panel is in a very poor state on conservation. It is divided in three registers, the first showing the preparations for war; the middle battle scenes between Romans and Parthians; and the last the emperor speaking to the troops (on the left) and the liberation of a besieged city with the flight of the enemy king (on the right).

The second panel shows scenes from the war against the Osroeni. Of the three registers, the lower shows the Roman forces attacking Edessa with war machines, and the surrender of the city; the middle register shows Septimius Severus talking to the troops (left), and the surrender of king Abgar of the Osroeni to the emperor; lastly, the upper register show the emperor in charge of operations (left) and a war council in a fortified camp (right).

The third panel (to the left on the Capitol side) is divided in two registers. The lower shows the attack on the city of Seleucia on the River Tigris, with the Parthians fleeing on horseback towards the right; and above the Parthians surrendering to the emperor and his entry into the conquered town.

The fourth and last panel shows, in two registers, the siege of Ctesiphon, the capital of the Parthians, using war machines, and the flight of the defeated enemy king; and above finally the emperor addressing the victorious troops in front of the captured city.

This kind of narrative reliefs is very similar to the reliefs on the Column of Trajan and on the Column of Marcus Aurelius. Here they are adapted to another kind of monument, but the concept is the same. The reliefs on the Arch of Septimius Severus are more schematic that the ones on the older columns. Another source of inspiration can be the painted panels the victorious commanders sent back to Rome. Such paintings were often used as a part of the triumphal procession.

On the two lateral arches the spandrels are decorated with fluvial deities and the keystones with deities, that are unidentifiable due to the poor state of conservation. One might be Hercules.

Just above the lateral arches a narrow band of reliefs depicts triumphal processions.

The bases for the eight detached columns are decorated with reliefs of Roman soldiers and Parthian prisoners. These reliefs are wonderfully preserved, maybe because they have been buried for much of the time since antiquity.

The identification of the arch is absolutely certain, based on the inscription, which reads:

To the Emperor Septimius Severus, Son of Marcus, Pius, Pertinax, Pater Patriae, Parthicus Arabicus,
Parthicus Adiabenicus, Pontifex Maximus, having held the tribunician power 11 times,
acclaimed emperor 11 times, Consul 3 times, Proconsul,
and Emperor Marcus Aurelius (Caracalla), Son of Lucius, Antoninus, Augustus Pius, Felix,
having held the auspicious tribunician power 6 times, Consul, Proconsul, Pater Patriae,
Highest and Strongest Princes
for having restored the State and enlarged the Empire of the Roman people,
by their visible strengths at home and abroad, the Senate and People of Rome [made this]

The inscription is repeated on both sides of the attic. Originally it mentioned both the emperor Septimius Severus and his two sons Caracalla and Geta. The name of Geta was removed in 212 CE, when he was killed by Caracalla after the death of Septimius Severus. A condanatio memoriae was issued, and all images or mentions of Geta were to be removed from all public buildings and monuments.

The holes used to attach the bronze letters allow a reconstruction of the original inscription, which had the fifth line changed. Originally it read: “P. Septimio L. fil Getae nobilissi(mo)”; translated: “to the most noble son of Lucius Septimius, Publius Septimius Geta”.

There are 36 photos in this gallery.