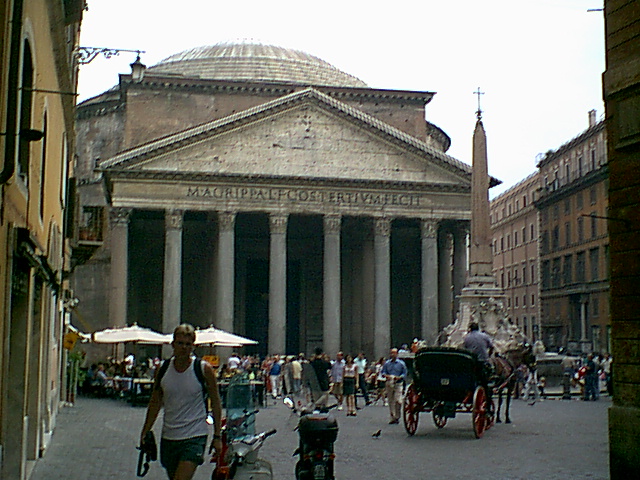 The Pantheon in Rome

Rome is the Eternal City. With an almost uninterrupted history as an important centre of power for more than two millennia, Rome is as close to eternal as it gets.

Rome is the Eternal City. With an almost uninterrupted history as an important centre of power for more than two millennia, Rome is as close to eternal as it gets.

According to the legend, Rome was founded on the Palatine Hill on April 21, 753 BC, by Romulus who also became the first king of Rome. The legend is not all wrong. The first traces of human settlement in the area have been found on the western slope of the Palatine Hill, dating from the 10th century BC, while the first evidence of the existence of a city is from the middle of the 8th century BC.

The city soon encompassed the adjacent Capitoline Hill and the drained lowland between the hills became the Forum Romanum. This became the political and economic centre of the city for all antiquity, while the Capitoline Hill became the religious centre. Later the rest of the seven hills of Rome became part of the town. For most of the republican era the city remained within the ancient Severian Walls, and only in the 1st century BC the city started to grown larger. Three centuries later the city covered the area within the Aurelian Walls which remained the largest extent of the town until the 19th century.

For more than five centuries Rome was one of the largest and certainly the most powerful and glamorous of the cities of the western world. The decline started in the 3rd century, where the first sign of weakness was the construction of the Aurelian Walls, and continued in the 4th and 5th centuries, when the capital of the Roman Empire was moved away from Rome. No longer the centre of power, maintenance and construction of monuments and buildings vaned, and Ancient Rome was gradually reduced to crumbling ruins.

The only social force remaining after the fall of the Roman Empire of the West was the Christian Church. Rome soon became the capital of the catholic world, and this would be the importance of Rome for more than a thousand years to come. The wife of emperor Constantine I gave what was to become San Giovanni in Laterano to the church, and this sanctuary became the centre of papal power for centuries to come. Also of the 4th century is the Basilica of Saint Peter, which was constructed on the site of the death and burial of Saint Peter.

The centre of the city moved. The ancient city was centred on the Forum Romanum and the Imperial Fora, but Christian Rome had its centre on the Campus Martius. The ancient centre had become fields, grassland and gardens, as the medieval city dwellers huddled together in a corner of what had been the imperial capital.

Many non-christian sanctuaries were converted to christian churches, and thus owe their survival to the church. This is the case of the two temples in Piazza Bocca della Verità and also Castel Sant’Angelo, originally the mausoleum of Emperor Hadrian. Many others, however, were deliberately destroyed by zealous christians.

Rome became one of the most important centres of pilgrimage, and soon flourished again. New churches were built, and the pilgrims brought work and money.

This lasted until the pope was forced to move to Avignon (1309), leading to the almost 70 year long schism of the church. In this period Rome was reduce to the smallest size since the origin, barely 20.000 inhabitants on the brink of the Tiber River.

With the return of the Pope (1377) good fortune returned to Rome again. With few interruptions Rome now lived more prosperous and tranquil times until the Napoleonic wars of the early 19th century. Rome was artistically enriched by artists as Michelangelo Buonarroti, the creator of the marvellous Piazza di Campidoglio and Gian Lorenzo Bernini, who created the colonnade in Piazza San Pietro and the Spanish Steps.

With the Napoleonic wars, the Pope was expelled, but he returned with the restoration after the war. In the following years there were still more public discontent with the rule of the Pope, which lead to several rebellions. These were crushed with the aid of French troops. France had become the main defender of the temporal powers of the Pope.

When the rest of Italy was united under Piedmont’s rule in 1859-60, Rome was left undisturbed, mainly because of the presence of French troops in the city. When these soldiers were called back to France in 1870, the young Italian State quickly attacked and seized Rome, which again became capital of all of Italy.

The new Rome, the ‘Third Rome’, underwent many changes. First, a massive expansion of the city started. The size of the town had been much the same since medieval times, and the papal town lived comfortably with the Aurelian Walls with room to spare. Within a few decades the city had spread also outside the ancient walls, and entirely new areas were developed. Second, the town centre suffered many changes too. A renaissance quarter constructed on top of the ancient Imperial Fora was completely demolished to create space for the new Piazza Venezia and the massive Vittoriano monument, and an entire wing of the Palazzo Venezia had to be moved to a nearby location. The space in front of Campidoglio and the Piazza Bocca della Verità were overrun by traffic as the Via Teatro Marcello was opened. Similar urban interventions were made to create the Corso Vittorio Emanuele connecting Piazza Venezia and the Vatican.

Of new constructions in this period the Palazzo di Giustizia comes to mind, besides the Vittoriano. The enclosure of the Tiber River is also from this period.

When the fascists took over power in 1921, they immediately started to adapt Rome to their ideas of an imperial capital. Some ancient monuments were unearthed or uncovered, like the Ara Pacis and the Mausoleum of Augustus, other destroyed or covered up, like the Meta Sudans and Imperial Fora.

Other new additions to the image of the town were added. An entirely new quarter were constructed to the south to house the “Esposizione Universale di Roma” (EUR). The world exposition of 1936 was never held, though, because Italy had invaded Ethiopia and consequently was under an embargo by the League of Nations. The African wars brought new additions to the decoration of Rome, notably the Obelisk of Axum. The fascists used Piazza Venezia (called Piazza Italia) as the location public meetings, so to enlarge and improve the square the Via dei Fori Imperiali was created, connecting Piazza Venezia with the Colosseum.

In the other end of town, to the north, the new Olympic Stadium, the Foro Italico, was built, and on the other side of the river the Olympian village, Villaggio Olimpico, to accommodate the athletes. The outbreak of the second world war effectively cancelled the Olympic Games of 1940, so the whole complex was unfinished and unused until the Olympics of 1960, held in Rome.

Rome suffered little materially under the war and development soon continued after the war, giving rise to a number of poor and squalid peripheral suburbs of high rise buildings.

Few new monuments have been erected in the last half a century. The new Mosque is a lone exception.

There are 207 photos in this gallery.