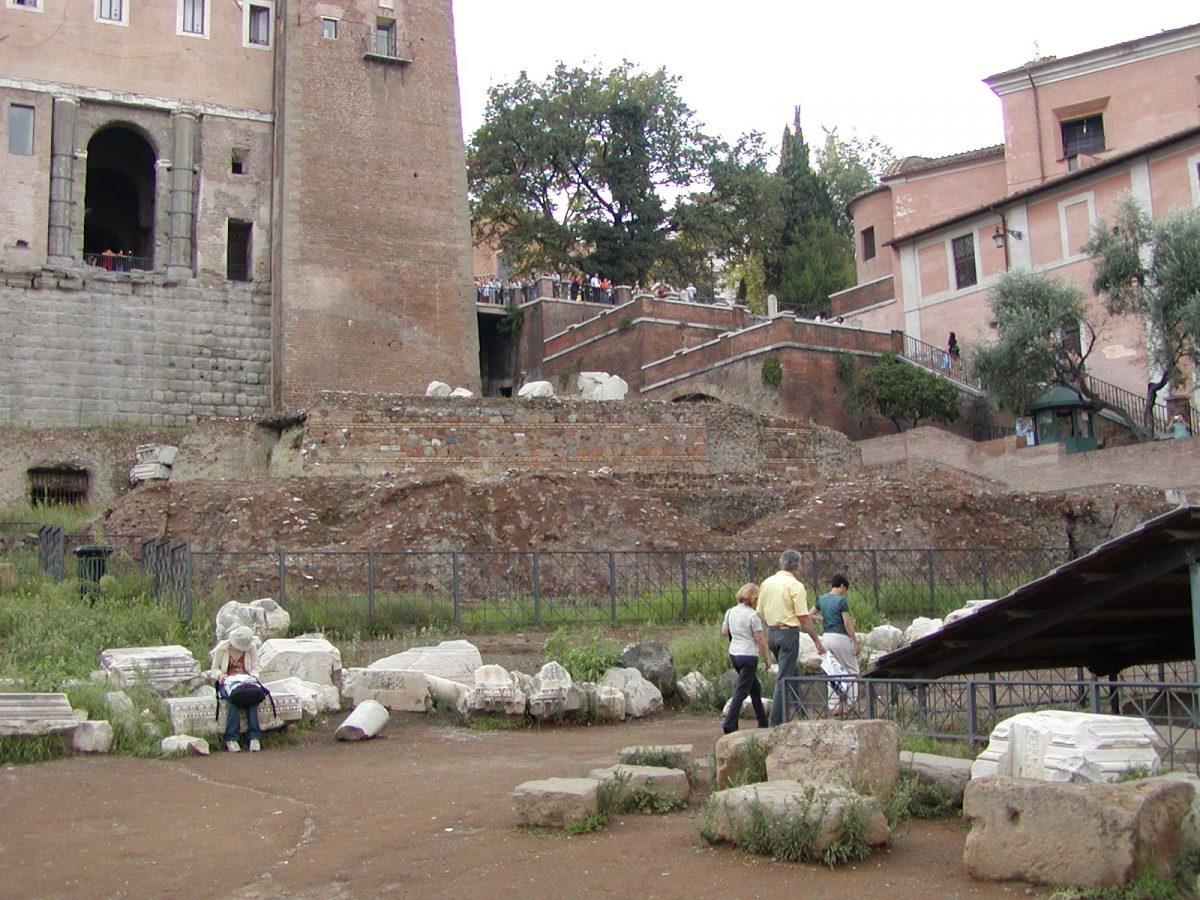 The Temple of Concord (Templum Concordiae) celebrates the concept of concord in general, and the concord achieved in 367 BCE between the Patricians and the Plebeians in particular. It is located at the foot of the Capitoline Hill, on the Clivus Capitolinus between the Temple of Vespasian and Titus, the Arch of Septimius Severus and the Mamertine Prison.

According to tradition the temple was dedicated in 367 BCE by M. Furius Camillus the same year as the Lex Licinia finally settled the century long power struggle between the Patricians and the Plebeians. This temple must have been smaller than that present ruins and more archaic in style, but little is known. It might not even have been built! It is a possibility that the first temple was not really built before 218 BCE, by the praetor L. Manlius.

The temple was thoroughly restored in 121 BCE by L. Opimius. After the murder of Gaius Gracchus and much political violence, there was a strong political need to emphasise Concord. Besides the temple Opimius built the Basilica Opimia. See this map below for an illustration of the probable locations of the buildings.

In the period from 7 BCE to 10 CE the temple was completely rebuilt by Tiberius, before he became emperor. The old temple and the Basilica Opimia were both torn down and a new, larger temple built.

The ruins in the Forum Romanum are from this temple. It was wider than it was deep, measuring 45×24m. This is very unusual, but the limited space available allow no more. The cella stood on a podium, accessible by a frontal stairway. The hexastyle pronaos stood out from the facade of the cella, much like a portico, again dictated by the lack of space.

The temple is all but destroyed. The only surviving parts are the podium and the threshold of the door of the cella, both still in situ, and a fragment of the entablature, now kept in the Tabularium, and a Corinthian capital, now in the Antiquarium of the Forum.

The temple, being a templum and not just an aedes, was at times used for meetings of the senate. It was here, in the old temple, that Cicero made his fourth catiline speech. Later the trial of Sejanus, who had conspired against Tiberius, was held in the Temple of Concord.

During the reign of Tiberius the temple was also used as a kind of museum of Greek sculpture and painting.

The few surviving ruins of the temple can be seen from the Forum Romanum, but the best viewpoints are from within the Tabularium or from the stairs leading to the Capitoline Hill.

Photo gallery for "Temple of Concord"

There are 10 photos in this gallery.

Pages related to "Temple of Concord"

Pages referring to "Temple of Concord"