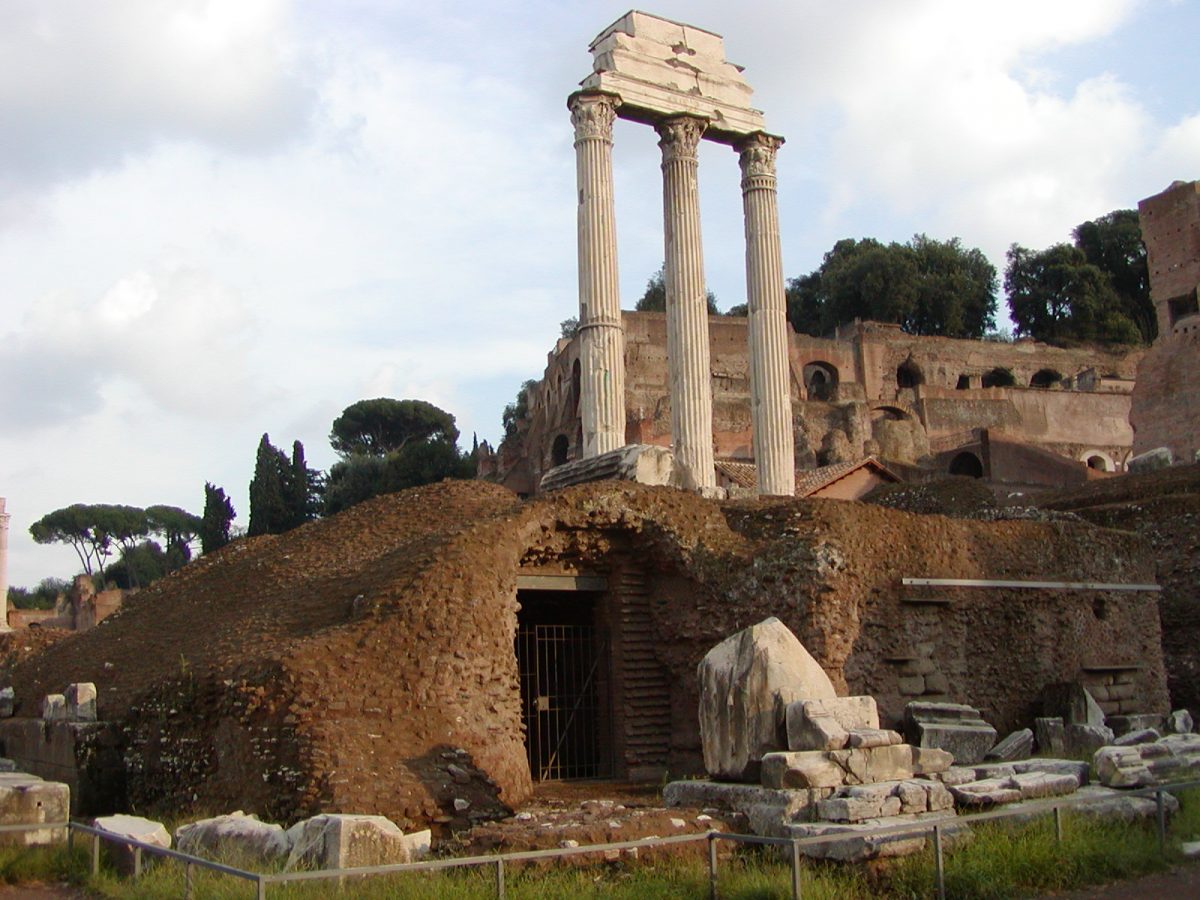 Temple of Castor and Pollux

The Temple of Castor and Pollux in the Forum Romanum in Rome was built and dedicated after the battle at Lake Regillus in 496~BCE.

The Temple of Castor and Pollux (Templum Castorum or Aedes Castoris) introduced the Greek cult of the dioscuri into Rome, in its very heart, the Forum Romanum. It is located between Basilica Julia across the Vicus Tuscus, the Temple of Divus Julius, the Arch of Augustus and the Temple of Vesta.

The foundation of the temple is closely related to an ancient myth. The last, deposed king of Rome, Tarquinius Superbus, and his allies, the Latins, waged war on the infant Roman Republic. It came to a battle near the Lake Regillus in c. 496 BCE.

The legend says that two able, but unknown horsemen helped the losing the Roman troops to victory, and immediately afterwards they were seen watering their horses at the Spring of Juturna in the Forum Romanum.

They were identified as the Dioscuri, and the dictator, Aulus Postumius Albinus, vowed to build a temple in their honour. The temple was finished by his son in 484 BC.

Castor’s temple was dedicated the same year, on the fifteenth of July. It had been vowed during the Latin war by Postumius, the dictator. His son, being made duumvir for this special purpose, dedicated it.

The archaic temple was completely reconstructed and enlarged in 117 BCE by L. Cecilius Metellus Dalmaticus after his victory over the Dalmatians. This second temple was again restored in 73 BCE by Gaius Verres.

In 14 BC the temple was destroyed by a fire that ravaged major parts of the forum, and it was rebuilt by Tiberius, then heir to the throne. Tiberius’ temple was dedicated in 6 CE. The remains visible today are from the temple of Tiberius, except the podium, which is from the time of Metellus.

In republican times the temple served as a meeting place for the senate, and from the middle of the 2nd century BCE the front of the podium served as a speakers platform. During the imperial period the temple housed the office for weights and measures, and was a depository for the State treasury.

The temple was peripteral, with eight Corinthian columns on the short sides and eleven on the long sides. There was a single cella, which was paved with mosaics. The podium measures 32×49.5m and 7m in height. It is constructed in opus caementicium and was originally covered with slabs of tufa, which were later removed. According to ancient sources the temple had a single central stairway to access the podium, but the excavations have identified two sideways stairs.

As many other buildings on the Forum Romanum, the temple has suffered destruction, looting and ruin since Antiquity. Today the podium survives without the facing, and of the temple proper remain only three columns and a piece of the architrave.

Livy on the battle of Lake Regillus (from The Perseus Digital Library):

Photo gallery for "Temple of Castor and Pollux"

There are 26 photos in this gallery.

Pages related to "Temple of Castor and Pollux"

Pages referring to "Temple of Castor and Pollux"