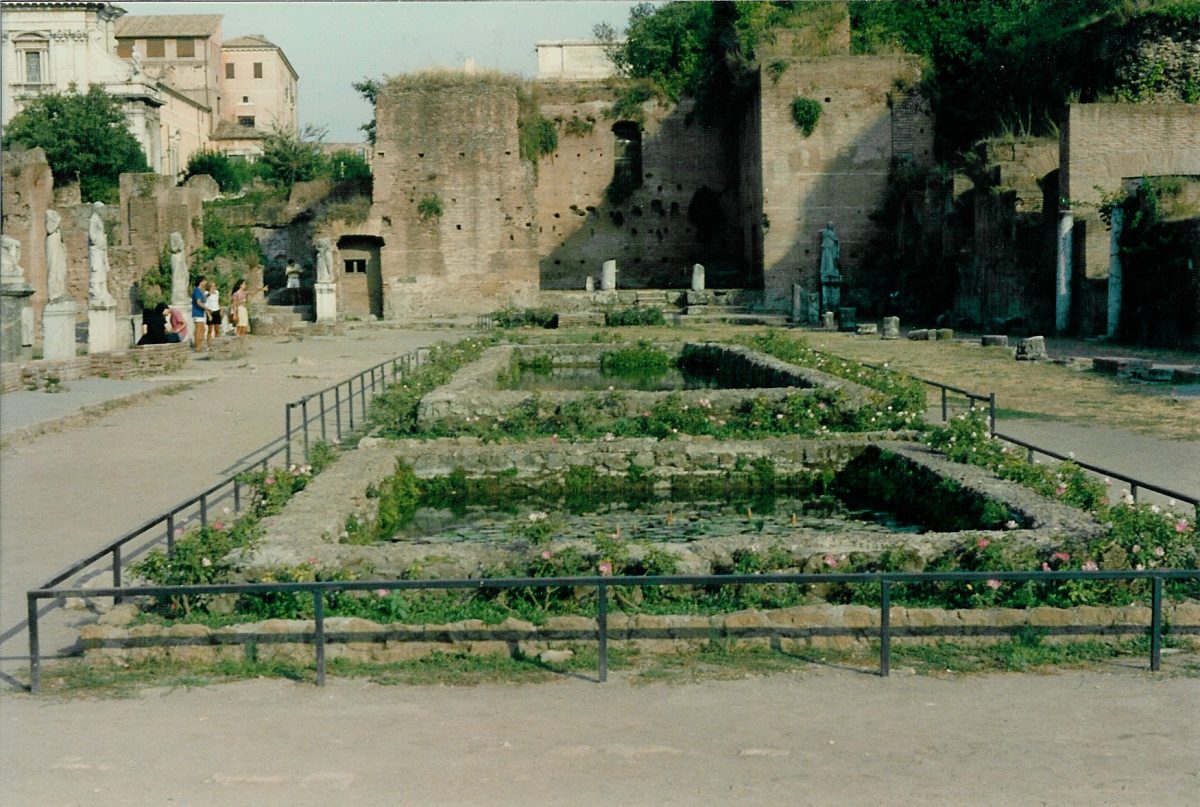 The house of the Vestal virgins

House of the Vestal Virgins

The oldest building on the area was much smaller than the present ruins. It was aligned on a E.-W. axis and formed a single complex with the Temple of Vesta, the Regia and the Domus Publica, which encompassed all the religious duties of the king and his family. It is likely that the wife and daughters of the king administered the cult of Vesta in this period. When the king was expelled from Rome a group of young patrician women were appointed to the cult of Vesta.

The first known house of the vestals was a simple building at the foot of the Palatine Hill. It was within an enclosure that also included the Temple of Vesta, and it consisted of front room in the full width of the house on the N. side towards the temple, and six separate rooms in the back. It is tempting to assume that the rooms are for the six vestals, and hence the house is from after the expulsion of the king.

The ground plan, which was aligned with the Regia and the Domus Publica, was maintained for over five centuries until the Neronian fire of 64 CE, which destroyed the area completely.

The currently visible ruins are from the House of the Vestals that was built after the fire. The whole area was reorganised and the orientation of the house changed to follow the palace on the Palatine Hill and the new Via Nova, thus breaking the relationship with the Regia. The new house was much larger, and included the area hitherto occupied by the Domus Publica.

The entrance was from the west, close to the Temple of Vesta. Originally in three storeys, the building was centred on an elongated atrium, surrounded by a two storey portico of 18×6 columns. There were three basins in the atrium, two rectangular at the ends and an octagonal in the middle. In the time of Constantine the central basin was filled in and made into a flower bed. Statues of the elder vestals were displayed under the portico, but were removed when the cult was forbidden. The statues in the atrium today were found on the ground in a separate room, but many have re-erected, though not on the right bases. The statues on display are from the time of Septimius Severus.

To the extreme E. were an open vaulted hall with three small rooms on each side. This has been interpreted as the rooms of the vestals, which were six in number, but it was probably a sanctuary for the Lares. A statue of Numa Pompilius, the mythological founder of the cult, was placed there.

The S. side of the complex consisted of utility rooms, such as a kitchen, a mill, an oven. These were probably used for the preparation of bread and cakes for various rituals performed by the vestals. The vestals are thought to have had their private rooms on the first floor.

To the N. little remains of the building and the purpose of the rooms are not known.

After the vestals left the place in 394 CE, the complex was used for imperial offices, which explains the removal of the statues after the suppression of all non-Christian cults.

Earlier attempts were made to recreate the ambient of the atrium by reintroducing water in the basins and placing the statues on the bases again, thus giving a decent impression of the complex, though only the lower parts of the walls have survived to this day. As of the summer of 2002 the area is fenced off and overgrown.

It might not be possible to enter the atrium at all times, as it is sometimes fenced off.

Photo gallery for "House of the Vestal Virgins"

Pages related to "House of the Vestal Virgins"

Pages referring to "House of the Vestal Virgins"