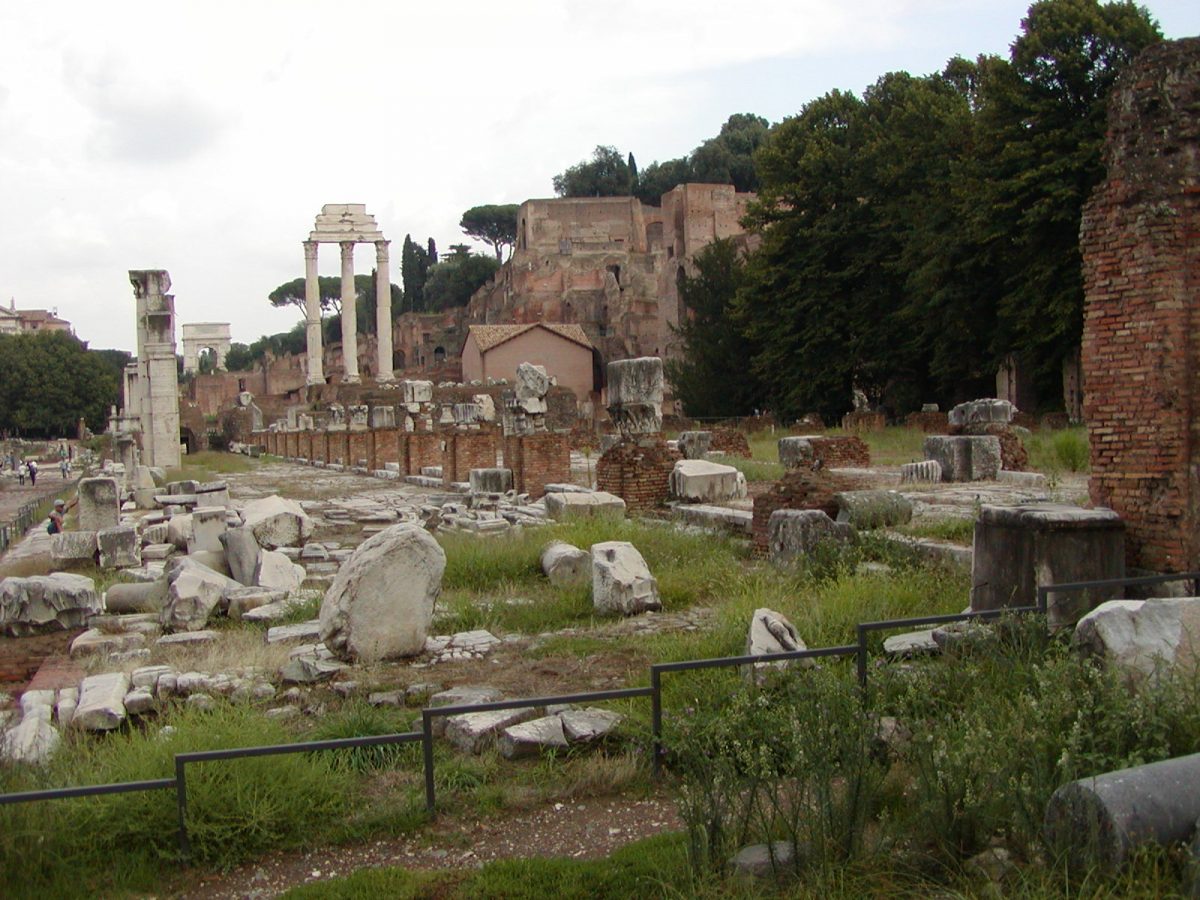 The remains of the Basilica Julia in the Forum Romanum

The Basilica Julia was built in 54-48~BCE by Julius Caesar as a part of his reorganisation of the Forum Romanum, where it replaced the Basilica Sempronia.

Julius Caesar started construction in 54 BCE, but it was still unfinished at his death. It was built on the site of the Basilica Sempronia and a series of shops, the tabernae veteres, that were all demolished.

Augustus finished the building after Caesar’s death, but had to reconstruct it again shortly after, due to its destruction by fire in 9 BCE. It was dedicated again in 2 BCE, this time in the name of Gaius Caesar and Lucius Caesar, Augustus’ designated heirs at the time.

The basilica was later damaged much by the fire in 283 CE, and restored a few years after by Diocletian. It was again destroyed when Alaric sacked the city in 410 CE.

The Basilica Julia was of huge proportions. The basilica rested on a low podium, seven steps high on the E. side and just one on the W. side, due to the sloping terrain. Of outer dimensions 101×49m, the central nave of the basilica was 82×18m. The four lateral aisles, two on each side, were two storeys high, with vaulted ceiling and arches decorated by semi-columns. The central nave was three storeys high.

The function of the Basilica Julia was to house tribunals and other activities from the Forum when weather didn’t permit outdoor meetings. The central nave probably divided in four by wooden removable structures to allow the hearing of more cases at a time. The basilica also housed some administrative offices of the city.

Game boards and graffiti are incised in the steps and in the pavement of the side aisles by idling visitors to the Forum. Some of this can still be seen on the side of the main square of the forum.

The building was in ruin already in late Antiquity, and subsequently stripped of all reusable material, i.e., almost everything.

Very little of the building remains now. The basic floor plan can be seen, and some parts of brick walls remain towards the Temple of Saturn, some bases of statues still in their original position, and the four step podium remain. The brick column bases are reconstructions of the 19th century.

The area of the basilica is usually enclosed with a fence, but it can be seen from the outside.