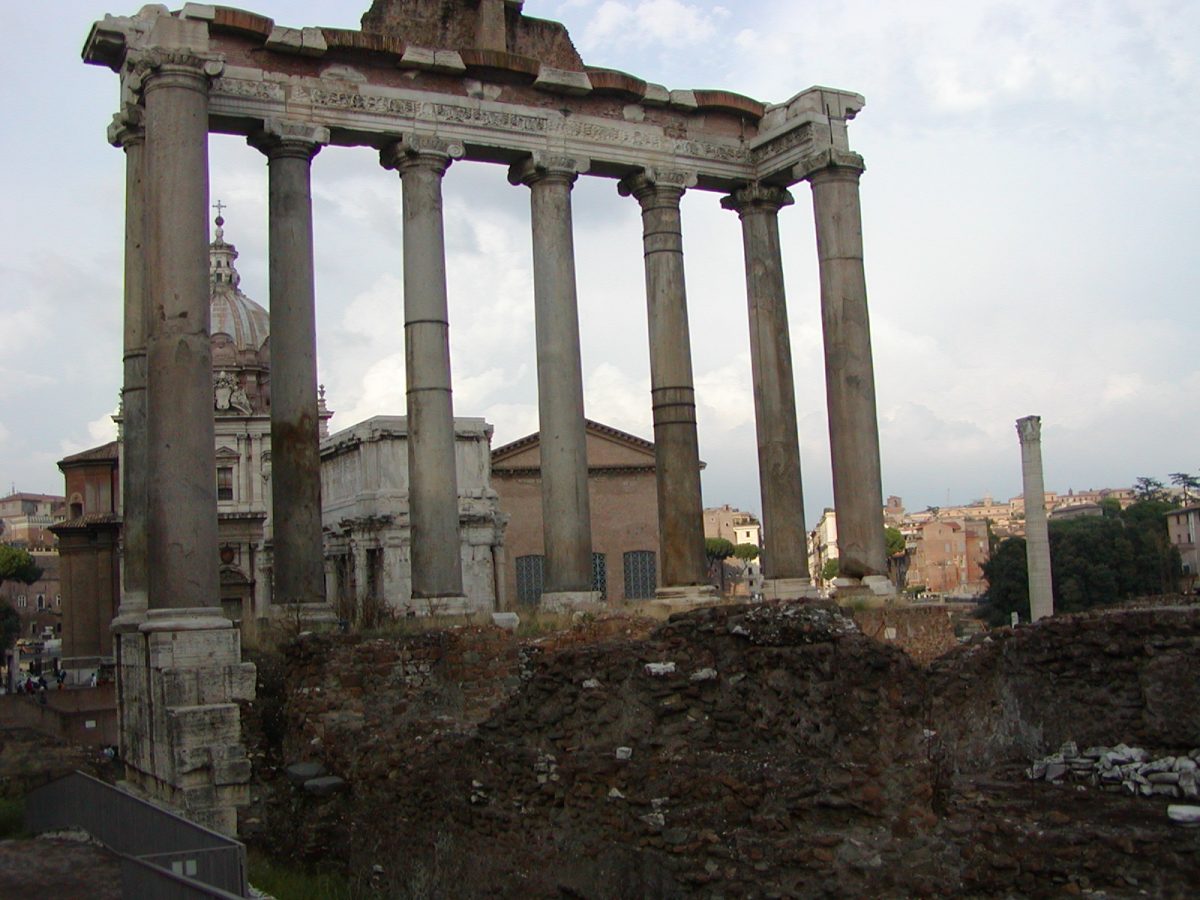 The remains of the Temple of Saturn in the Forum Romanum

Temple of Saturn was the first temple built in the Forum Romanum in Rome in 498~BCE. It had an important role in the Saturnalia, and the cellar housed the Roman treasury.

The Temple of Saturn (Templum Saturni or Aedes Saturnus) is the oldest temple in the Forum Romanum, consecrated for the first time in c. 498 BCE. It is located in the W. end of the Forum, behind the Rostra and the Basilica Julia, across the Clivus Capitolinus from the Temple of Vespasian and Titus.

There have been three temples dedicated to Saturn on the location. The first was built in the last years of the Roman Kingdom, but was first consecrated in the first decade of the Roman Republic. Very little is known about this archaic temple, but it was probably Etruscan in style, just as the contemporary Temple of Jupiter Capitolinus on the Capitolium.

The first temple was torn down in 42 BCE and a new temple built in stone, by the aedile L. Munatius Plancus. The tall, massive, travertine clad podium, measuring 40×22.5m with a height of 9m, is from this building. This temple was in turn destroyed by the fire of 283 CE, which destroyed major parts of the Forum Romanum.

The temple was reconstructed under Diocletian after the fire, but the ground plan and podium from 42 BCE was retained. The temple was of the Ionic order with six columns on the facade. The eight surviving columns of red and grey granite are from this third temple, which largely used recycled material—not all columns, bases and capitals match stylistically.

The inscription on the architrave is also from this period. It reads: “Senatus populusque romanus incendio consumptum restituit”; meaning “The Roman senate and people restored what fire had consumed”.

In front of the podium, under the now collapsed stairway, were two rooms, one of which served as the Aerarium, the State Treasury. On the side of the podium holes remain from where a plate was attached for the posting of public documents and acts pertinent to the Aerarium.

Inside the temple stood a statue of of Saturn, which would be carried in procession when triumphs were celebrated. The feast of the Saturnalia on December 17th was a part of the cult of Saturn and was started with a sacrifice at the Temple of Saturn.

Photo gallery for "Temple of Saturn"

There are 44 photos in this gallery.

Pages related to "Temple of Saturn"

Pages referring to "Temple of Saturn"