The Arch of Janus is situated in the Velabrum. 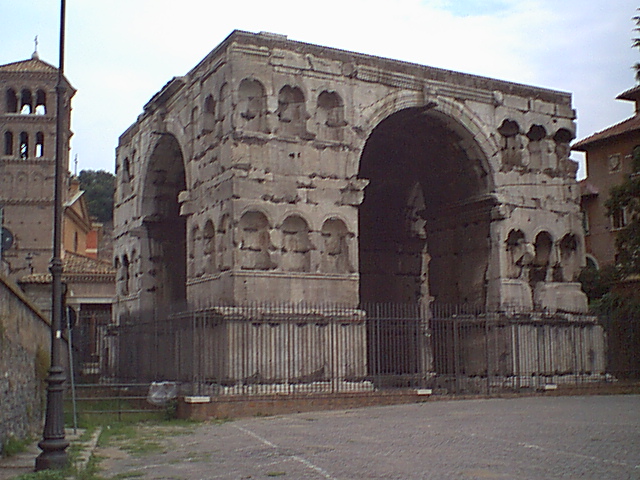 The Arch was built around 356 AD by Constantius II in hounour of Constantine. The formal name was “Arcus Divi Constantini”, Arch of the Devine Constatines. At that time Rome was no longer the capital of the empire, and the occation was a rare visit by Constantius II to Rome. Janus was the divinity of arches, gates, doorways and bridges, but the present name is a later invention.

The arch is build on a square basis, 12m wide, and it is 16m high. The structure is marble clad, in part with reused marble from other monuments. All the sides are decorated with two rows of semicircular niches, that used to contain statues. Now all decoration is lost, only the shell formed upper parts of the niches remain. The niches were originally flanked by two small columns each as was the taste of the 4th century. The remains of the original roof was demolished by mistake in 1837, because it was belived to medieval.

The arch was transformed into a fortress in the Middle Ages by the Frangipane family, who built a tower on top of it. When this tower was removed in the 19th century, some ancient structures went with it.

The monument can be seen from the outside.

Photo gallery for "Arch of Janus"

Pages related to "Arch of Janus"

Pages referring to "Arch of Janus"