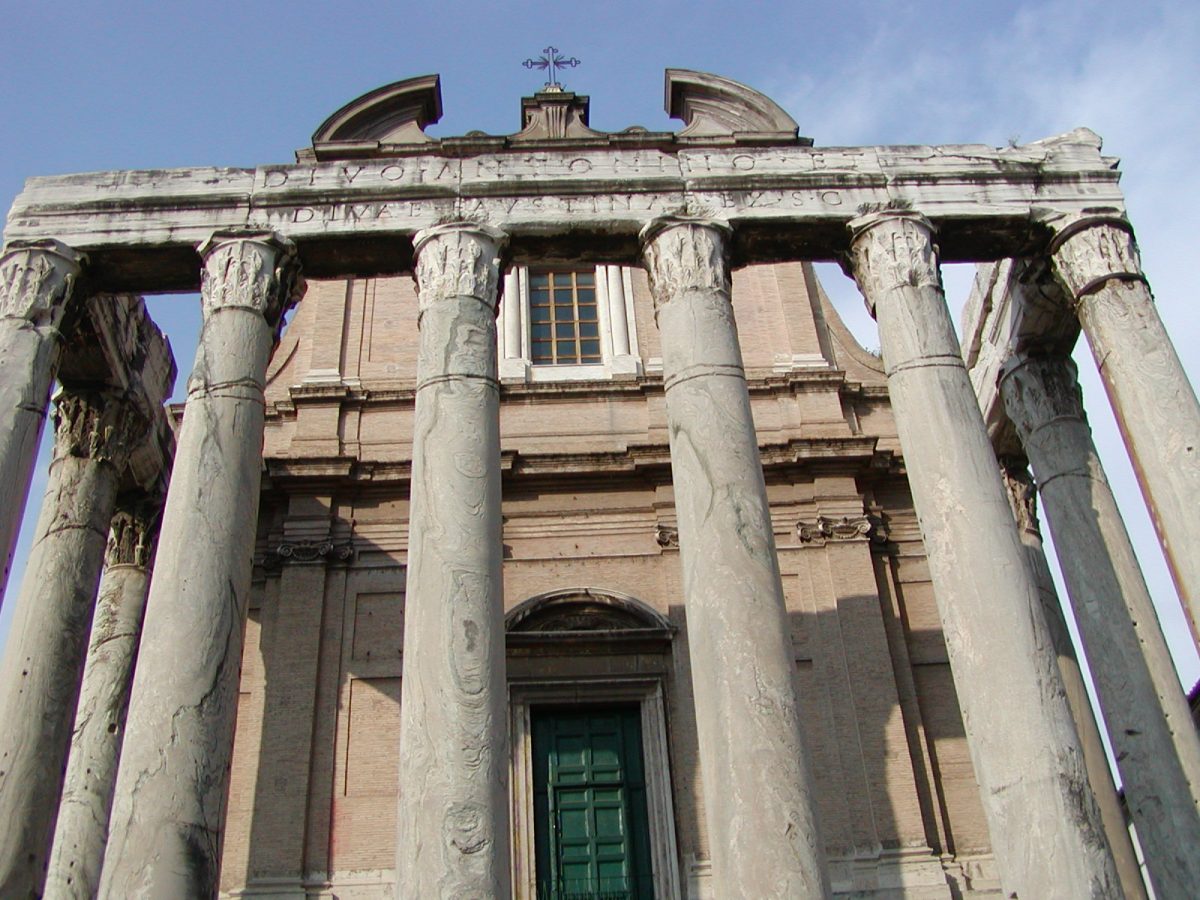 The front of the temple of Antoninus and Faustina

Temple of Antoninus and Faustina

The Temple of Antoninus and Faustina in the Forum Romanum in Rome was built by the Antoninus Pius after the death of his wife Faustina in 141 CE.

The buildings stands on a lofty podium of large peperino blocks.

The temple itself is hexastyle, prostyle with an additional two columns on the sides of the porch. The columns are of cipollino marble, monolithic, measuring 17m in height, with capitals of the Corinthian order. The entablature is decorated with a frieze with griffins, candelabra and acanthus scrolls, and originally extended all around the cella.

The dedicatory inscription was made in two steps. The original inscription is the second line, dedicating the temple to Faustina.

The first line was added later, after the death of Antoninus Pius, by chiseling away a part of the frieze and adding the words “Divi Antonino et”, thus completing the inscription.

The cella is built in opus quadratum with blocks of peperino, covered with travertine slabs that have since be removed. The holes used for fixing the slabs are still visible. The original roof has disappeared completely.

Access to the porch was by a broad stairway, of which only the three lower steps are original. The current stairway is a reconstruction. In the middle of the steps were a semi-circular recess where an altar stood.

Coins showing the temple depict statues on the porch, and remains of some statues have been found nearby.

Pieces of two over life-size statues of Antoninus Pius and Faustina are probably from the cult statues of the temple. They have probably been taken outside and smashed to pieces when the non-Christian cults were forbidden in the late 4th century CE. Some coins also show the area in front of the temple fenced off.

There are several graffiti on the columns of the temple, several showing monuments and statues found nearby in the Forum.

The columns have some diagonal grooves on the upper half. It is not known with certainty why they are there.

One explanation is that ropes have been attached there in an attempt to tear down the entire pronaos of the temple, either by Christian zealots to destroy a pagan sanctuary, or simply to use the marble to burn limestone. The grooves are from the rubbing effect of the rope when repeated attempts were made overturn the columns.

Another explanation is that the grooves are from the attachment of a temporary roof over the building in the 14th century.

The remains of the temple was converted into a church, San Lorenzo in Miranda, in the 7th or 8th century, for which it owes its splendid conservation. The baroque pediment behind the colonnade is from this church.

The temple is best viewed from the side of the Forum Romanum.

Photo gallery for "Temple of Antoninus and Faustina"

Pages related to "Temple of Antoninus and Faustina"

Pages referring to "Temple of Antoninus and Faustina"