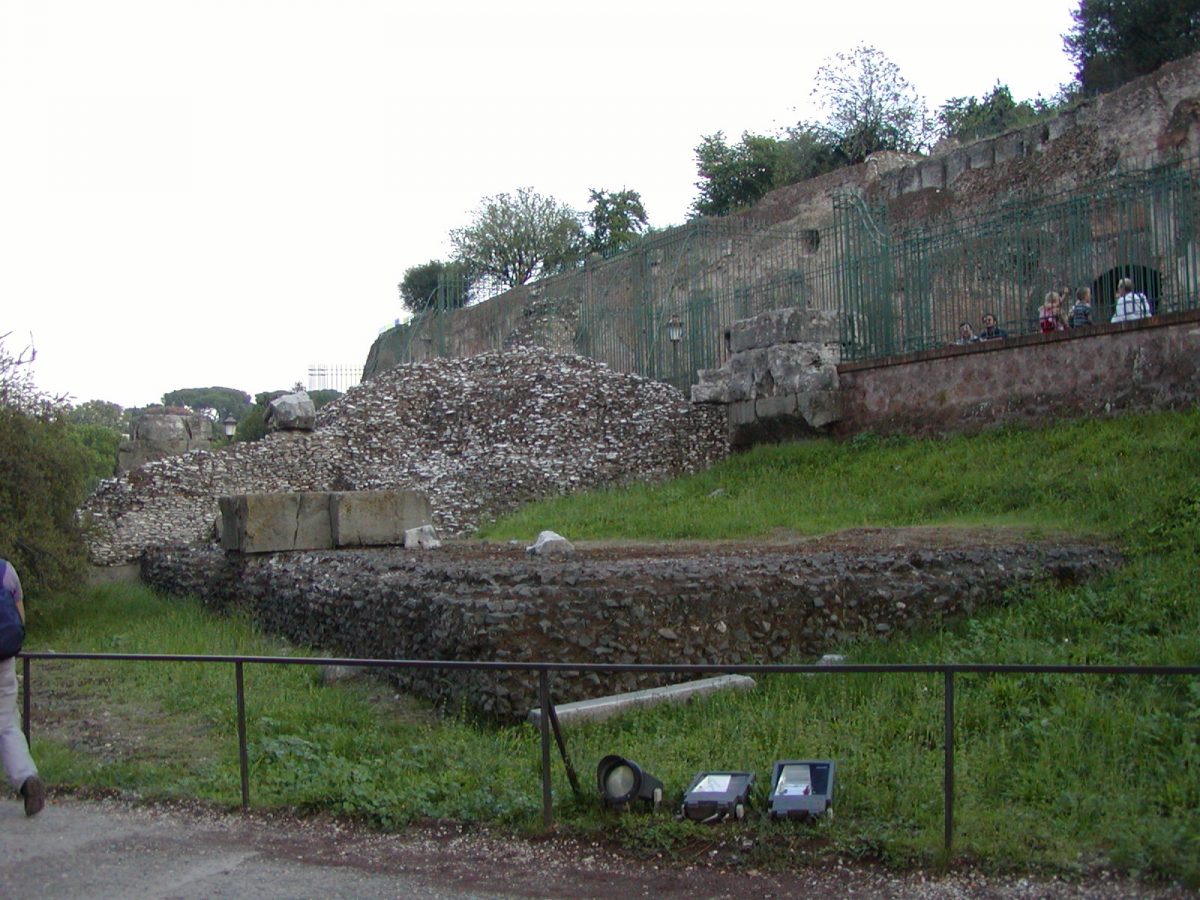 The remains of the Temple of Jupiter Stator (maybe)

The Temple of Jupiter Stator was traditionally built by Romulus to thank Jupiter when he made the fleeing Romans stand against the Sabines on that spot.

The Temple of Jupiter Stator was first vowed, according to ancient tradition, by Romulus after a battle with the Sabines. The city of Rome was hardly more than a settlement on the Palatine Hill, and the battle was taking place in the valley, in the Forum Romanum.

The Romans were forced to retreat up hill by the Via Sacra, but at the Porta Mugonia they managed to regroup and hold their ground against the Sabines, who were eventually defeated.

Romulus consecrated a templum to Jupiter Stator, “The Stayer”, at the spot, just outside the Porta Mugonia. The sanctuary was not an aedes, more likely it was an altar enclosed by a low wall or fence.

In 294 BCE Marcus Atilius Reguilus made a similar vow in a similar situation, when the Romans were losing a battle against the Samnites, but then miraculously turned around, regrouped and held their ground against the enemy. Afterwards he had an aedes, a temple building, constructed on the site of the archaic altar.

On November 8, 63 BCE consul M. Tullius Cicero convened the senate to a meeting in the Temple of Jupiter Stator, where he held his famous first oration against Catiline, denouncing an attack on the state, which he then ruthlessly suppressed.

The location of the Temple of Jupiter Stator is not known with absolute certainty. The written sources give some hints, such as near or just outside the Porta Mugonia (but it is not known where that was), on the higher end of the Via Sacra or just on the Palatine.

There is a fair amount of consensus on a location just besides the Arch of Titus on the N. slope of the Palatine Hill. When a medieval tower was demolished in 1827, the ruins of an ancient building appeared, and these remains are frequently identified as the foundations of the Temple of Jupiter Stator.

The Italian archaeologist Filippo Coarelli places the Temple of Jupiter Stator closer to the forum, between the Temple of Antoninus and Faustina and the Basilica of Maxentius, where the so-called Temple of Romulus stand.

His line of reasoning is based on the course of the Via Sacra before the construction of the Basilica of Maxentius, the known borders of the ancient administrative regions of the city and literary sources listing the monuments in each region.

The location near the Arch of Titus does not fit, since it is in the wrong administrative region and not in the right position relative to the other buildings listed by ancient writers, but the Temple of Romulus on the Via Sacra is a perfect match.

The photographs on this page are of the ruins near the Arch of Titus.