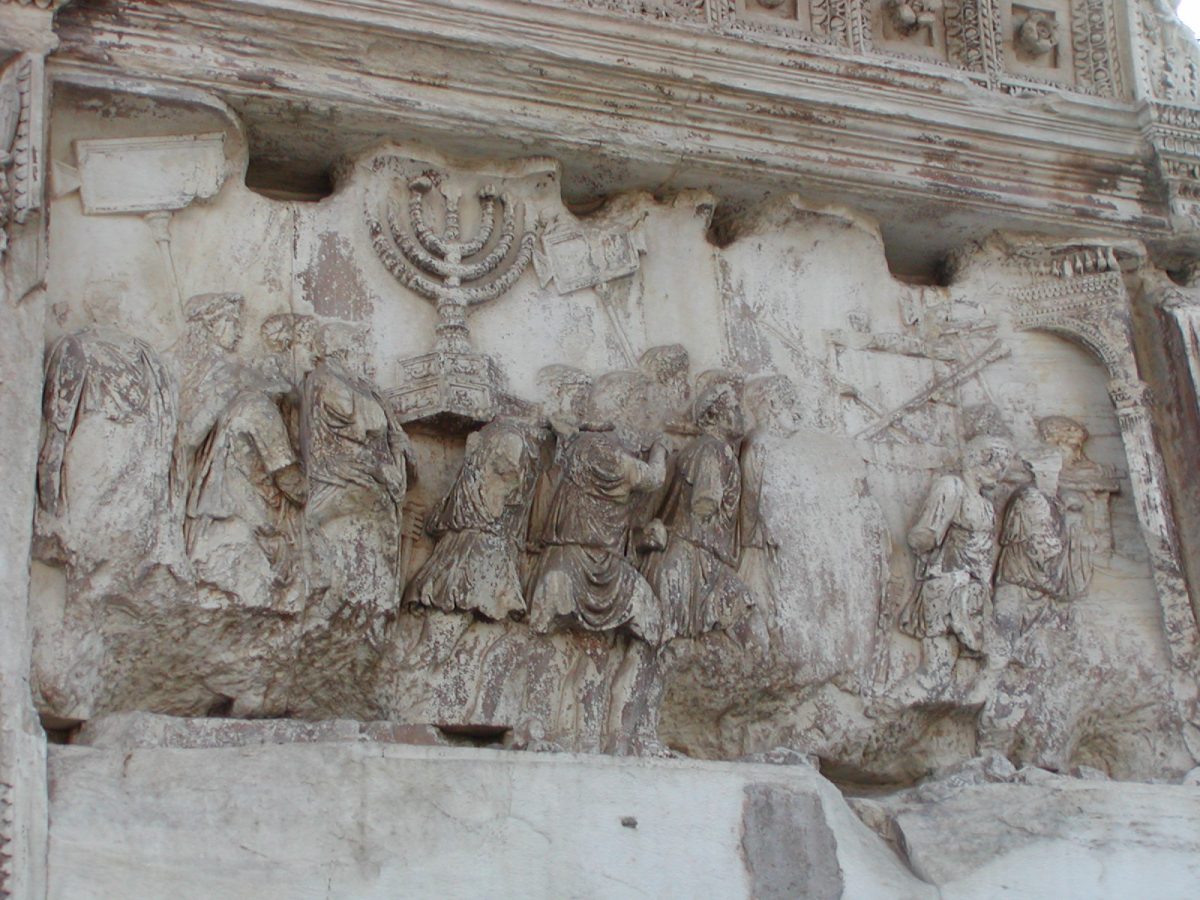 Arch of Titus - The spoils of the sack of Jerusalem

The Arch of Titus commemorates the victory of Vespasian and Titus in Judea in 70~CE, and the conquest of Jerusalem and the destruction of the Jewish temple

The Arch of Titus (Arcus Titi) is a triumphal arch that commemorates the victory of the emperors Vespasian and Titus in Judea in 70 CE, which lead to the conquest of Jerusalem and the destruction of the Jewish temple there, and the triumphal procession the two held in Rome in 71 CE. It is situated at the E. entrance to the Forum Romanum, on the Via Sacra, south of the Temple of Amor and Roma, close to the Colosseum.

The arch was definitely erected sometimes after after the death of Titus in 81 CE, since Titus is referred to as Divus in the inscription. The deification of an emperor only happened posthumously after decision by the senate. It was most probably erected by emperor Domitian who succeeded his brother Titus in 81 CE, but it has also been suggested that it was built later, by Trajan, because of stylistic similarities with the Arch of Trajan at Benevento.

The Arch of Titus is a single arch, measuring 15.4m in height, 13.5m in width and 4.75m in depth, originally constructed entirely in Pantelic marble, with four semi-columns on each side. The external decorations include figures of Victoria with trophies on the spandrels and images of Roma and the Genius of Rome on the two keystones.

The inscription on the E. side is the original dedication of the arch by the senate. It reads:

The senate
and people of Rome
to the divine Titus, son of the divine Vespasian,
Vespasianus Augustus

The inside the archway the monument is decorated with reliefs in marble. The S. side shows the beginning of the triumphal entry into Rome of the victorious emperor and his troops. The soldiers, walking left to right, are carrying the spoils of war, which include the seven armed candelabrum and the silver trumpets from the temple of Jerusalem. The signs carried by some soldiers displayed the names of the conquered cities and people. To the right the procession is entering the city through the Porta Triumphalis.

The N. side of the arch is decorated with a relief of the emperor in the triumphal procession. The emperor is riding a quadriga, which is lead by the goddess Roma, and he is crowned by Victoria flying above him. The lictors are walking in front of the chariot with their long ceremonial axes. After the emperor follow as a young man, who represents the Roman people, and an older man in toga, representing the senate. In the middle, under the vault a small relief shows the apotheosis of Titus, flying to the heavens on the back of an eagle.

In the Middle Ages the arch was incorporated into the fortifications of the Frangipane family. This has helped conserve the monument, and destroy it. It was especially badly damaged in fighting in the area in the 12th and 13th centuries. The fortifications were demolished in 1821-2, and the arch was restored by Valadier. As a part of this restoration the side facing the Forum Romanum was almost entirely rebuilt in travertine, leaving that side much whiter, and the external sides were also completely reconstructed. The original parts are the central passageway and the inscription and the two central semi-columns of the E. side towards the Colosseum.

The excavations of the roads around the Arch of Titus has lowered the street level too much, to the Augustan level from before the Neronian fire of 64 CE. A part of the foundation of the arch is therefore exposed. It would not have been visible when the arch was first constructed.

The arch is visible as a part of the archaeological zone of the Forum Romanum, but it is usually not possible to pass under it.

Photo gallery for "Arch of Titus"

Pages related to "Arch of Titus"

Pages referring to "Arch of Titus"