Vestibule of the Small Circus

The Vestibule of the Small Circus is a room in the larger private apartment of the Villa Romana del Casale. It is located between the Atrium of the Fishing Cupids, and the Cubicle of Choruses and Actors.

The room is the antechamber of the Cubicle of Choruses and Actors. 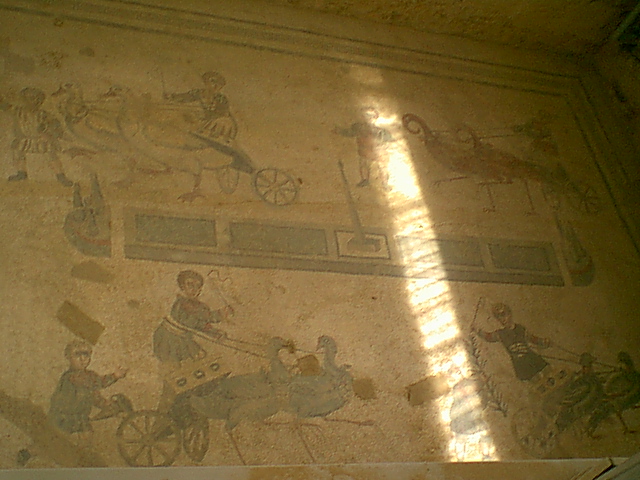 The mosaic depicts a children’s version of the chariot races of the circus. In the centre is the spina of the circus, complete with the obelisk and the metae, represented as three conical columns, at each end. The four teams (factiones) are each represented by a chariot drawn by two birds of the colour of the team. The factio russata by red flamingos, the factio prasina by green wood pigeons, the factio albata by white geese, and the factio veneta by blue plovers.

The charioteers are children dressed in long sleeve tunics of the colour of the factio. Each team also has a child on foot, carrying an amphora and urging the birds to run. In the lower front, the factio parsina has won and the charioteer is handed a palm leaf as a sign of victory.

The scene depicted here is a children’s version of the races portrayed in the Palestra in the thermal baths. The parallel is taken to the point where it is even the same factio that wins, maybe giving a hint about the preferences of the owner of the villa. This kind of parallel is also present in the Cubicle of Children Hunting.

The mosaics are very well preserved, showing only minor damages.

Photo gallery for "Vestibule of the Small Circus"

Pages referring to "Vestibule of the Small Circus"