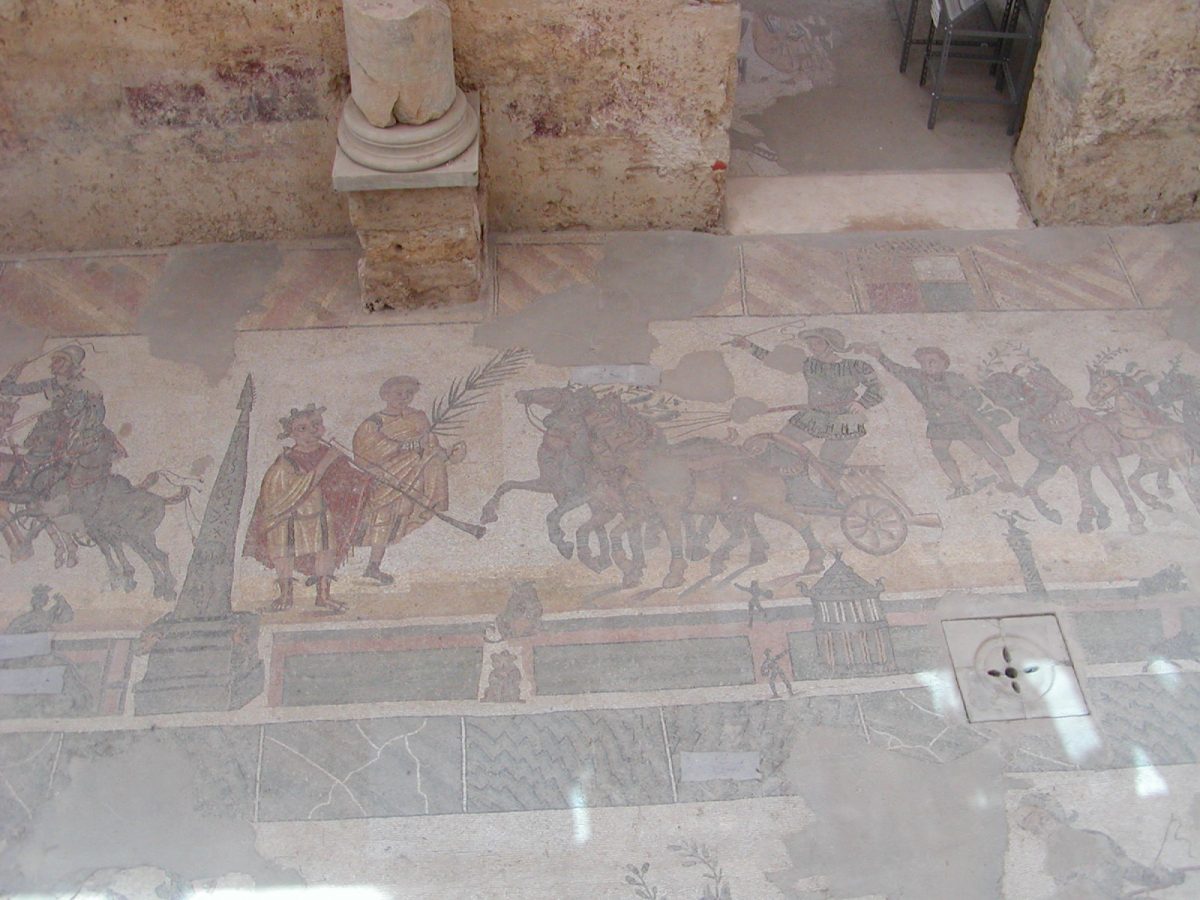 Scene from the horse races in Rome

The palestra, or gym, in the Villa Romana del Casale is close to the thermal baths, and they're decorated with a mosaic showing the horse races in the Circus Maximus in Rome.

The palestra, or the gym, of the thermal baths of the villa romana del casale is located between the entrance to the baths, the atrium and the frigidarium.

The room was probably used for physical exercise before or after the hot baths.

The mosaics are some of the more interesting in the villa. The long narrow room is decorated with a single, spectacular mosaic of the horse races in the Circus Maximus in Rome. It is one of the best contemporary depictions in the world of the Circus Maximus and the races held there.

To the far right (in the northern apse) are the twelve carceres, the booths where the quadrigae, the four horse chariots, start. Behind the carceres are the three temples dedicated to Hercules, Ceres and Flora that are known to have been located there.

The race consists of seven laps around the central spina, literally the dorsal spine of the track. The seven laps were symbolically represented by seven eggs, the septem ova, which were also present on the spina (and are in the mosaic). Also on the spina are the Obelisk of Augustus, now in Piazza del Popolo in Rome, and a statue of Cybele. At both ends of the spina are the metae, groups of three conical columns.

The spina was placed asymetrically so at one end of the course the turn would be very sharp. The number of incidents were therefore much higher at that end, and on the mosaic spectator platforms are placed there.

The races were highly organised and the participants were representatives of four teams, each distinguished by a colour. They were the factio russata (red), the factio prasina (green), the factio albata (white) and the factio veneta (blue). The races were normally financed by members of the senatorial class in Rome, and the presence of this mosaic and its very detailed depiction of the Circus Maximus clearly links the villa with the Roman elite that would regularly attend and finance the races.

In the mosaic the four teams are shown three times, at different stages of the race. To the left the four chariots have just left the carceres and are heading at full speed for the first lap. To the right the four chariots are mid-race. Below the spina the green factio prasina barely avoids getting tangled up in the naufragium, crash, of the red team, while the blue and the white teams are hopelessly behind, above the spina.

In the upper, central part of the mosaic the winner of the race is received by the magistrate of the races and is given the symbols of victory. On the mosaic the winner is the green team, the factio prasina, in front of the red team. Below the spina, still in the middle, are the remaining two teams, the white and the blue, without any changes in the race, so they finish the race at a slow pace, as can be seen from the legs of the horses.

There are some additional persons on the race track. The arbiter is on horseback so he can follow the race closely. The persons on foot are the sparsores. They carry an amphora and their job was to sprinkle water on the horses as they passed.

The mosaic in the palestra is very well preserved, though there are some lacunae.

The palestra was adorned by four columns on each side and the walls were painted in bright colours.

The photographs are all taken from above the wall at the eastern side of the palestra, towards the entrance to the baths.

There are 21 photos in this gallery.