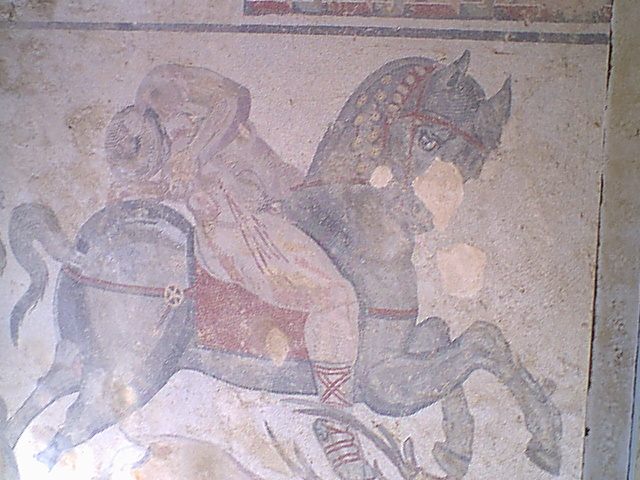 The Mares of Diomedes - one of Hercules' twelve labours

The triclinium is a monumental dining room the Villa Romana del Casale in Sicily, with polychrome mosaics of the Twelve Labours of Hercules

The triclinium is a dining room the Villa Romana del Casale. It is located in the S. part of the villa, with entrance from the elliptical peristyle.

The triclinium is a monumental dining room, probably used for banquets and other social events with important guests. It is a square room, 12×12m, with entrance from the elliptical Peristyle on the W. side, supported by two columns, and three large apses with a diameter of ca. 8m on the N., E. and S. sides, each separated from the central room by two columns. In the back of each apse is the pedestal of a statue.

The word “triclinium” meant the couch on which the Romans lay when dining, since such a couch had room for three persons reclining, and it also meant the dining room, because there would normally be three couches around the table.

Thus, there was room for nine persons around a single table. With a table in each apse, this triclinium would seat, or rather lie, up to 27 persons, leaving ample space for household slaves and entertainment.

The entire floor, measuring over 250 square meters, is covered with spectacular mosaics. The common theme of the mosaic is the various legends about Hercules and the idea of apotheosis.

In the central room are depicted men and animals related to the Twelve Labours of Hercules. Hercules himself does not appear in the scene. About half the mosaic has perished, mostly in the parts closest to the entrance and to the right, but several of the labours can be discerned.

The first labour, the Nimean Lion, is in the upper middle, lying in dead on the ground. Then came the Hydra of Lerna, depicted in the upper left quadrant, in the form of a serpent with a woman’s head with snakes instead of hair.

Third is the Cerynitian Hind, in the upper right quadrant, shown slain on the ground. The Erymanthian Boar, the fourth labour, is depicted stuffed into a huge jar in the upper centre, near the central rock, maybe with reference to the jar in which Eurystheus hid.

The next two labours, the cleaning of the Augean Stables and the Stymphalian Birds, seem to be lost. The Cretan Bull is represented in the upper left corner, falling to the ground. The Mares of Diomedes appears in several places, in the upper right, upper left and in the centre left. Their riders have been hit by Hercules arrows and are falling from the horses.

The ninth labour, the retrieval of Hippolyte’s Belt, also appears to be missing. Next is the Cattle of Geryon, where Geryon is to the left of a rock in the upper centre. The cattle is nowhere to be seen, so supposedly Hercules has already taken them away.

The retrieval of the Apples of the Hesperides is missing. Finally, Cerberus is depicted in the upper right, just to the right of the huge rock. Only fragments of the heads remain.

In the E. apse the Gigantomachy is depicted. During the war between the gods of Olympus and the Giants Hercules fought with bow and arrow on the part of the gods, and he killed several giants that way.

In this mosaic five giants have been hit by the poisonous arrows of Hercules and strive to extract the deadly points from their bodies.

Four of the giants have snake-legs, leave the central figure that has been tentatively identified as Enceladus, the giant that was killed when Athena threw a mountain over him. The mountain became the island of Sicily. The figures are very vivid in their agony.

The mosaic of the Gigantomachy is very well preserved.

In the passage between the main room and the apse, under the two columns, is a mosaic with various motifs.

In the centre, in the main entrance to the apse, are two small mythological scenes.

On the left is Hesione, liberated from the rock she was chained to and pointing at the mortally wounded monster in the sea, where it has been hit by Hercules arrows.

To the right Endymion is resting in a meadow. He is pointing at the sky, from where Silenus will descent. A dog is sniffing around in the vicinity.

The mosaic in the S. apse depicts the Dionysian myth of Lycurgus and Ambrosia. Lycurgus is standing in the middle, nude and muscular, with his axe raised ready to hit the Manaed Ambrosia to the right.

Behind him is a group of three Manaeds, one of which touches Lycurgus on the shoulder while threatening him with her raised thyrsus, in an attempt to stop him from finishing his insane act.

Below the Manaeds is a spotted panther, ready to attack Lycurgus, but it is held back by a nude boy wearing a crown of flowers.

To the right of Ambrosia the Bacchic group of Pan, Silenus and Dionysus is rushing to her help. The metamorphosis of Ambrosia has already begun, and her legs are changing into a vine that extends to the left, below Lycurgus.

The entangled branches of the vine cover the lower part of the mosaic, and a number of winged cherubs are playing between the branches. In the background some distant hills can be seen.

Major parts of the mosaic has been lost, mostly to the right, where parts of Pan, Silenus and Dionysus are missing. The elongated panel under the columns that precede the apse is completely lost.

The Glorification of Hercules

The N. apse depicts the coronation of Hercules in Olympus where he is accepted by the gods as their equal. Hercules is standing in the middle, bearded and nude except for a panther’s skin knotted on the chest.

Behind him to the left stands another figure, partially lost, clad only in a panther skin around the waist. It might be Dionysus. To the right a person, almost completely lost, is holding out his right hand and is about to place a wreath on Hercules’ head. This figure is probably Zeus.

In the lower left is depicted a subdued giant, shown on the ground in agony, and in the lower right are the remains of a figure, surrounded by what appears to be water plants, so it might be a river god. Behind Hercules is a tree with the Apples of the Hesperides.

At the entrance to the apse is a panel with two scenes of metamorphosis. To the left Daphne is changing into laurel tree while fleeing Apollo, who is not shown, and to the right Cyparissus is becoming a cypress after going mad because he inadvertently had killed his favourite stag.

The exact meaning of the mosaics here depends on who commissioned the villa, and we do not know.

The mosaics is clearly an allegory of heroic apotheosis through metamorphosis, and is was one of the major arguments for naming Maximianus Herculius as the owner of the villa. As emperor he would be deified after his death, just as his namesake Hercules, and the apotheosis of Hercules would indirectly be a tribute to the emperor himself.