A secondary peristyle for the invited guests 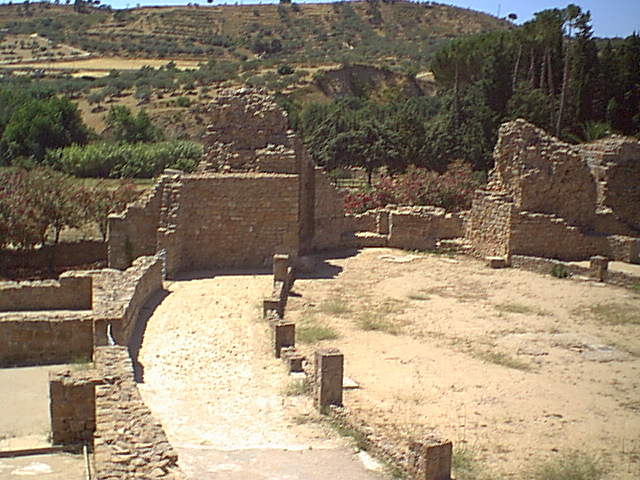 The elliptical peristyle is a ovoid space, approx. 30×22m on the main axes, open in the centre with a portico on the N., E., and S. sides. On the W. side is an apse, originally probably covered by a semi-dome, with three niches. The entrance to the triclinium is on the E. side. Along the N. and the S. side are groups of three little rooms that appear to have been service rooms.

The central open space was paved with slabs of marble, but it had a polychrome mosaic in a zig-zag pattern along the edge of the portico. In the middle was a fountain of which little remains. Another fountain was at the NE. side, close the the entrance to the triclinium. Here the basin remains.

The portico extends along three sides of the peristyle in a horse shoe shape. The walls under the portico were plastered and painted. Some fragments are still visible. The mosaic is all but destroyed, but the surviving pieces show a pattern of whirling acanthus scrolls containing animal heads of antelope, geese, bull, leopard, horse, duck, lion, bear and others. In between are some four-petalled flowers.

Of the rooms to the N. of the peristyle, the W. room has lost all mosaics. The middle room, which gave access to the other two, has remains of a mosaic showing cupids working at a wine press. The last room has a somewhat damaged mosaic of cupids vintaging. These mosaics are normally covered by sand as the area is not covered by a roof, so they are not visible to the public.

The rooms to the S. are similar. The middle gave entry to the other two, but it has completely lost its mosaic floor. Two rooms on the sides have similar motifs of cupids fishing. These mosaics too are normally by sand.

There are two entrances to the elliptical peristyle. One is through a corridor from the SW. corner of the central peristyle and another through an intermediary space from the Corridor of the Great Hunt. The first entrance has likely been used by the guests of the villa, while the host has used the second entrance.

The double entrance, one public and one private, and the splendour of the peristyle and the associated triclinium indicates an environment used for representative purposes, probably banquets and other social events. This has been one of the showpieces of the villa, designed to demonstrate the wealth and power of the owner.