A splendid hall with the legend of the poet Arion

The Hall of Arion is room on the Villa Romana del Casale. It is located in the larger private apartment, just across the Atrium of the Fishing Cupids from the Corridor of the Great Hunt.

The Hall of Arion is a large hall with an ample apse. The room measures 7m×8m and the apse has a diameter of 5m. The entrance from the Atrium of the Fishing Cupids is flanked by two columns, and the apse is likewise narrowed by two columns. The shape of the room bears a striking similarity to the Great Basilica. 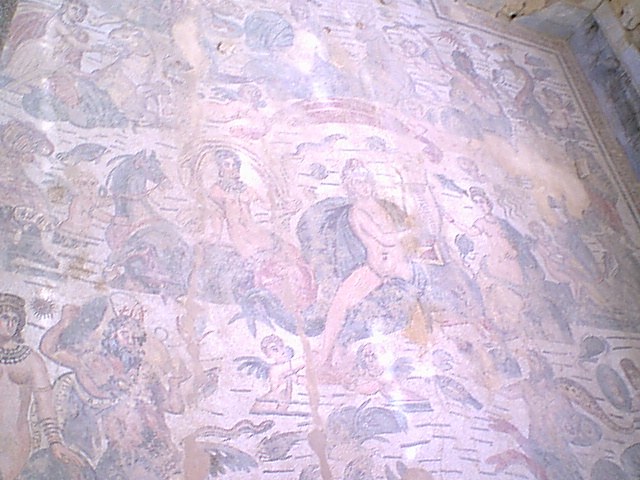 The room has probably been a living room, a triclinium or a library.

The mosaic in the rectangular part of the room depicts the Greek legend of Arion. Arion was a famous poet of Corinth in Greece. He decided to attend a musical competition in Sicily, which he won, but on return from Sicily the avaricious sailors plotted to kill Arion and steal the rich prices he carried homewards. Arion was given the choice of suicide, allowing a proper burial on land, or being thrown in the sea to perish. Neither prospective appealed to Arion and he asked for permission to sing a last song to win time.

Playing his chitara Arion song a praise to Apollo, the god of poetry, and his song attracted a number of dolphins around the ship. At the end of the song Arion threw himself in the sea rather than being killed, but one of the dolphins saved his lived and carried him to safety. Arion then continued to Corinth by other means and arrived before the sailors that tried to kill him. On return to Corinth the king didn’t quite believe Arion’s fantastic story. The sailors believed Arion was dead in the sea, and on arrival in Corinth they told the king that Arion had decided to remain in Italy. The king then understood that Arion’s story was true and punished the sailors with death.

In the centre of the mosaic Arion is riding a dolphin while playing his chitara. Above him two cupids are holding a red canopy to shade Arion from the sun.

Around Arion are, loosely organised in three or four registers, a multitude of naiads, tritons, cupids, sea monsters and fish.

The mosaic in the rectangular part of the room is very well preserved. Unfortunately the same cannot be said about the mosaic in the apse. This mosaic has only survived in fragments, but it appears to have been a representation of Oceanus, the god of the seas surrounding the world.

The wall was covered with slabs of marble. In some places the wall covering remains up to a height of 1m, showing two strata in different colour.

The Hall of Arion is the central and most important room of the larger private apartment, that was probably the apartment of the owner of the villa. The theme of the mosaic, the exaltation of the power of poetry, can therefore be expected to tell us something about the owner of the villa. He was probably a learned man with a passion of music and poetry.

A similar theme is present in the Hall of Orpheus.

Photo gallery for "Hall of Arion"

Pages related to "Hall of Arion"

Pages referring to "Hall of Arion"