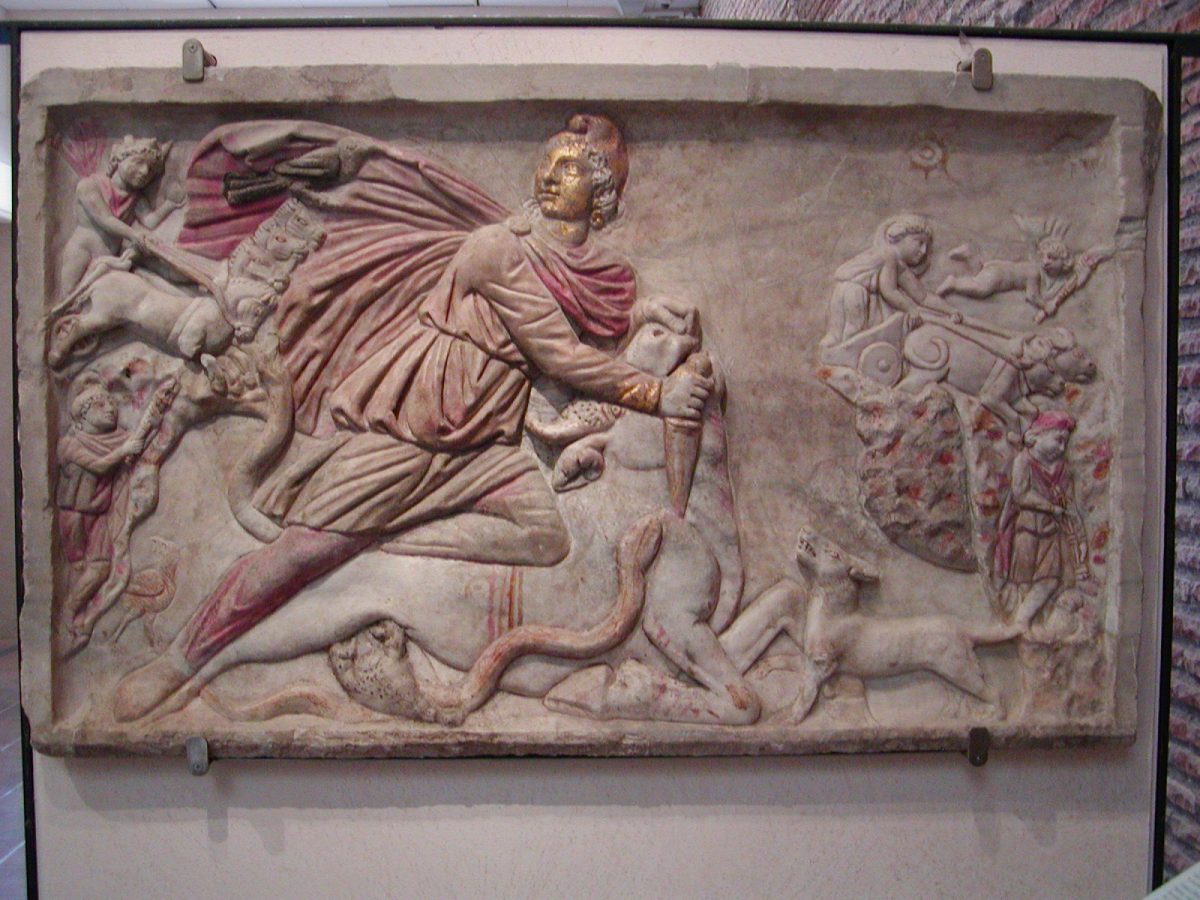 Mithras slaying the bull - relief in the Terme di Diocleziano

Mithras was a Persian god from the Zoroastrian pantheon where he was a helper and assistant to the power of Good against the power of Evil.

Mithras was a Persian god from the Zoroastrian pantheon where he was a helper and assistant to the power of Good against the power of Evil.

He was born from a rock, and his main service in the fight against Evil was the slay a bull, created by the Evil Lord. He killed the bull in a cave, and from its blood sprang all life.

The cult of Mithras, Mithraism, gradually detached itself from Zoroastrianism, and developed a mythology and rituals of its own.

Originally, Mithras was subordinate to the Lord of Good, identified with the Sun-god, but gradually he was regarded as a peer to the Sun, and finally identified with Sol Invictus, the Unconquered Sun.

The cult of Mithras came to Rome in the first century BCE, and quickly gained a steady following, mostly among soldiers, public servants and merchants. It was widespread throughout the Roman Empire in the first century CE, and peaked in the third century CE, before being suppressed along with all other non-Christian cults at the end of 4th century.

Mithraism was a mystery cult. New members, only men were allowed, had to go through an initiation ritual, which seems to have included some kind of test, before the rituals and ceremonies of the cult were revealed. There were seven levels of initiation, corresponding to the seven heavenly bodies known in antiquity. The rituals included a kind of baptism and communal meals.

The seven levels of initiation were:

Ceremonies and rituals were held in a Mithraeum (pl. mithraea), which was usually underground to resemble the cave where Mithras slew the sacred bull. The sanctuary had benches on both sides, probably for the ceremonial banquets, and in the back an altar, normally with a depiction of Mithras killing the bull. The mithraea were usually small in size, which indicates a rather limited number of worshippers.

There are 17 photos in this gallery.