Room with Girls in Bikini

The Room with Girls in Bikini is a cubicle in the Villa Romana del Casale. It is located between the peristyle, the Corridor of the Great Hunt and the Hall of Orpheus. Entrance is from the peristyle through an antechamber.

The room is either a cubiculum, a bedroom, or a service room of some kind. There are indications that it might have changed purpose after the villa was build. 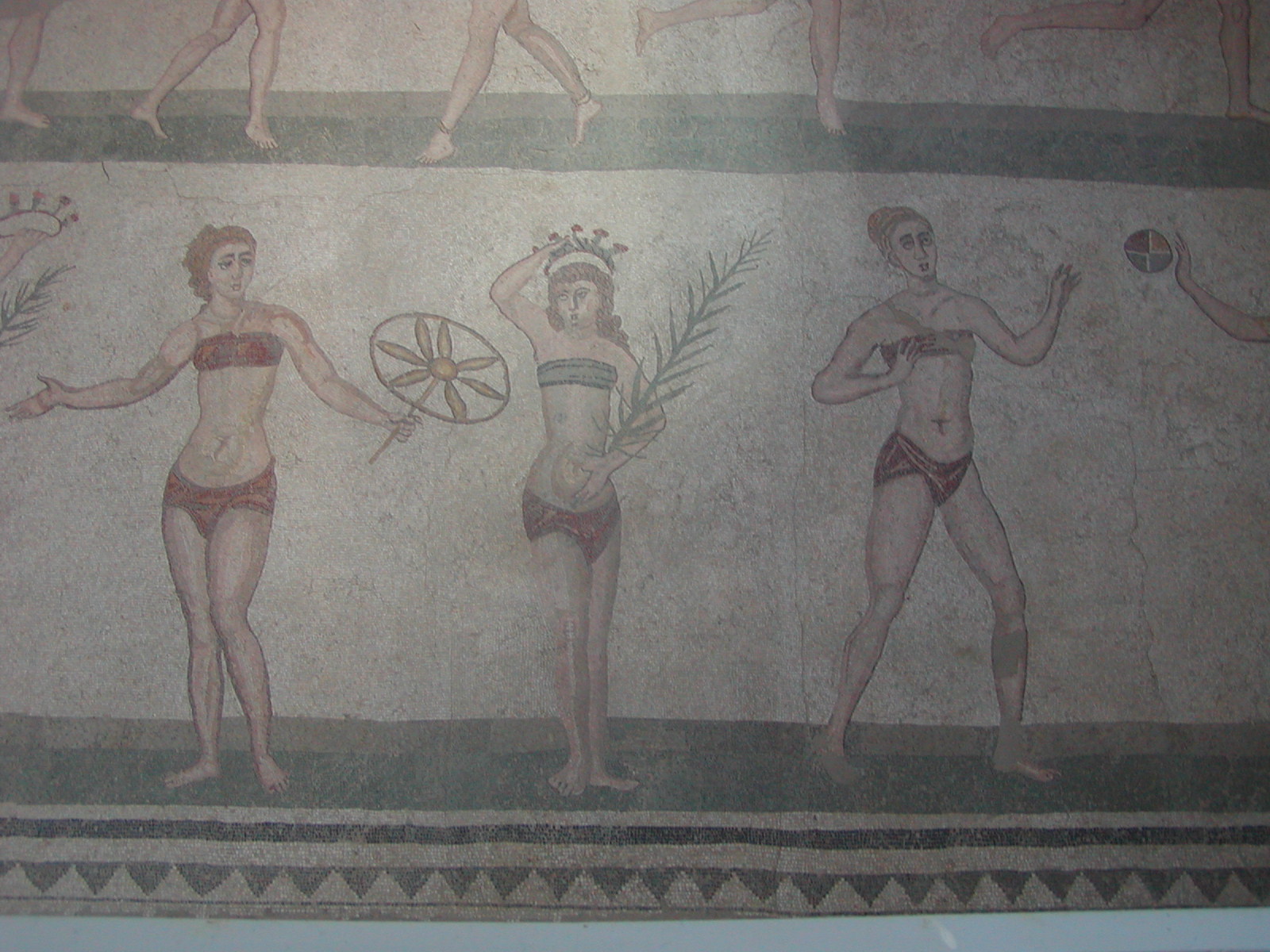 The mosaic mosaic shows ten young women, most of them engaged in athletic activities. The composition is divided in two registers. The left-most girl in the upper register has been all but lost. Then follows a girl exercising with hand weights, one just about to throw a discus and two running. Below to the right two girls are playing with multicoloured ball. In the centre the winner of a competition is standing with a palm leaf in her left hand while she is placing a rose crown on her head with the right hand. The next girl is holding an umbrella-like object in her right hand. It could be a symbolic chariot’s wheel. The last girl is entering from the left. She is clad in a golden mantle and carries a palm leaf and a rose crown for the winner.

The mosaic is very well preserved, save for the upper left corner that is completely lost and part of the decorative, geometric border.

Much of the fame of this mosaic is derived from the bikini-like costumes the girls are wearing.

Below the mosaic with the girls in bikini was another mosaic, a part of which can be seen in the upper left corner. It is a geometric mosaic with large eight pointed stars made of two intertwined squares with coloured guilloches. In the centre of the star is a garland with a flower motif in the centre.

The mosaic with the girls is therefore later than most of the other mosaics in the villa. How much later is uncertain, it might only be a few decades. Why a new mosaic was made is also unknown. The room might have been destined for other use, making a geometric mosaic improper, or infiltrations of water might have caused the original mosaic to subside.

Between the peristyle and the Room with Girls in Bikini is the antechamber. It is decorated with a geometric mosaic. The mosaic is divided in square parts by a grid made up of small triangles of varying size. Within the squares are different patterns. Some have a stylised flower made of four triangles, other a four petalled flower or four small lilies, and some a simple guilloche.

There are some traces of wall paintings.

Photo gallery for "Room with Girls in Bikini"

There are 15 photos in this gallery.

Pages related to "Room with Girls in Bikini"

Pages referring to "Room with Girls in Bikini"