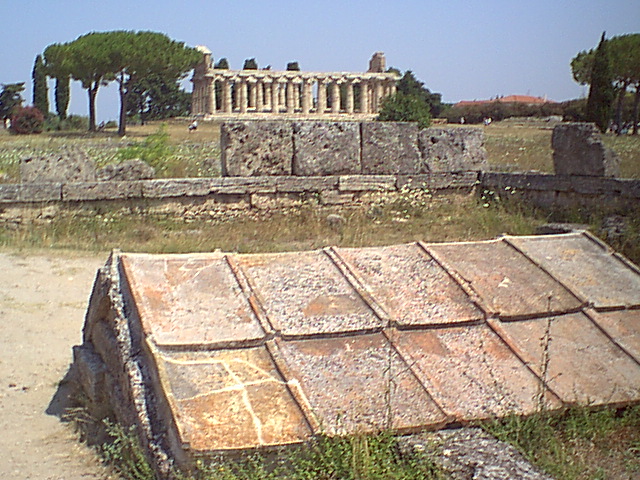 The Underground Shrine is an enigmatic monument in the ancient city of Paestum. It is possibly a heroon, a symbolic tomb of the heroic founder of the city.

The Underground Shrine is a monument in the ancient city of Paestum. The exact meaning of the underground shrine is not known, but it is possibly a heroon, a symbolic tomb of the heroic founder of the city. It has been dated to c. 510-500 BCE, based on its content.

The shrine is located in the area between the Temple of Athena and the Roman Forum, close to the Via Sacra.

The underground shrine is a small building embedded into the travertine crust on which Paestum is build.

It is rectangular, about 4.4×3.3m and 2.25m in height. Three sides of the building are constructed directly against the travertine crust, almost to the level of the roof, while the E. side is free. The building has a double gabled roof, a lower stratum of limestone slabs and an upper stratum of large terracotta tiles, 5×2 on each side. Only the roof extends above the current ground level.

The entrance was on the E., but it was only used once. Once the offerings had been placed inside the shrine, the wall was closed, never to be opened again, as if the shrine was a tomb.

The shrine contained very rich offerings. On a raised stone platform in the centre of the building two long iron sticks were found together with fragments of textile and leather. It could be the remains of a bed-like object.

On the floor around the platform were placed eight large bronze vessels and a Athenian ceramic amphora. All nine vessels were filled with a sticky substance, normally taken to be honey, and sealed with wax. The substance was still soft when the seals were broken.

Of the eight bronze vessels, six are hydriai, water jars with three handles, and two are amphorae with two handles. Some of the hydriai has handles shaped as hands or decorated with female heads. One in particular has the vertical handle shaped as a lion.

All eight bronze jars have been priced objects made of highly skilled and technologically advanced craftsmen, and they have no doubt represented a substantial fortune when they were placed in the underground shrine.

The amphora has been repaired. The base of the vessel was broken and it has been reattached with pieces of lead. It is unlikely a broken pot has been placed in the shrine for its value as a pot, hence the importance of the amphora is probably in the scenes painted on it.

The shrine was discovered in 1952 and entered by breaking one of the terracotta roof tiles, as there is no doorway. The broken tile has since been restored. The underground shrine is now empty, and all the offerings found inside are now on display in the Archaeological Museum of Paestum.