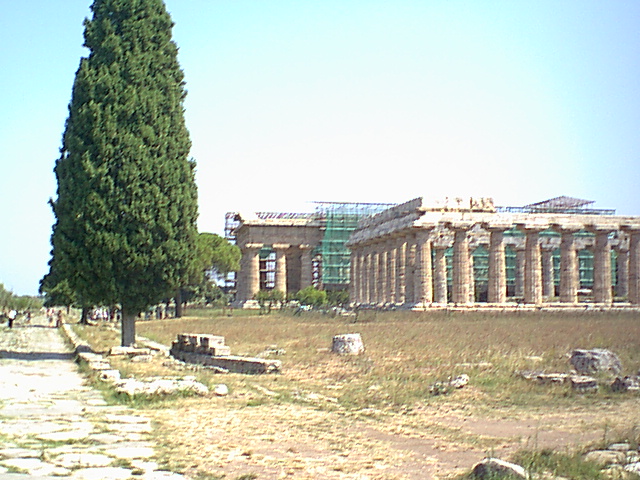 Temple of Hera II in Paestum

The Temple of Hera II is an archaic Doric temple from c. 470-460~BCE, in the ancient city of Paestum, and one of the best preserved Greek temples in the world.

The names Temple of Neptune and Temple of Poseidon are misnomers from the 18th century.

The temple is peripteral and hexastyle with 6×14 columns standing on a three step stylobate. Most of the outer parts of the temple have survived, including all 36 columns, the architraves, the frieze and the pediments.

The columns of the peristyle are made of the local travertine, but originally they were covered with stucco to give the impression of marble. Each columns has 24 flutes. The columns have a slight entasis and the echinus is not quite conical as in the classic Doric style. These archaic traits are less pronounced than in the two earlier temples.

The internal part of the temple is completely symmetric, in placement and form. The pronaos, the porch, has two Doric columns in antis and the opisthodomos, the back porch, likewise. The columns of the porches are of the same dimensions as the columns of the peristyle and aligned with them. The columns and the antae are still in situ, both in the front and in the back, but most of the rest of the walls of the cella are missing.

From the pronaos as few steps lead into the naos or cella. At each side of the passage is a small recess, of which one appears to have housed a staircase leading to the roof or a platform above the temple floor.

The temple had no adyton, or treasury, within the naos.

Little is known about the roof. It has been supported by wooden beams, that have been fitted into holes still visible in the entablature. The internal columns might have had a role in supporting the roof. The roof has probably been covered by large terracotta tiles decorated with terracotta palmettes or similar ornaments.

The Temple of Hera II belongs to a transitional phase between the archaic and the classic Doric order. It displays several of the traits of the archaic Doric order, such as entasis of the columns, a curved echinus and the number of columns to the sides should have been 13, not 14, to match the classic Doric ideal, and each column should have had 20 flutes instead of the actual 24.

On the other hand, the temple incorporates several architectural refinements that are particular to the classic Doric order. Several subtle adjustments has been made to the building to counteract visual distortion caused by viewing many parallel and perpendicular lines. The stylobate on which the peristyle rests is not completely horizontal, but curves slightly upwards in the middle along the sides of the temple. This is to compensate for the illusion that it would appear to be sagging in the middle, had it been perfectly straight. The same device was used in the lower cornices of the pediments. The columns of the peristyle incline a little bit inwards to counter the impression that they are moving outwards. Also the arrangement of the porch, with columns in antis is very typical of classical Doric.

The temple was dedicated to Hera. Votive offerings found in consecrated pits, the so-called stipe, indicate so. Unfortunately the pits have been disturbed, so the evidence is less than perfect. The size of the Heraion, of which the two temples dedicated to Hera were a part, was reduced after the Roman conquest of the city, and the disturbance might be a result of that.

The division of the naos in three by the internal columns might indicate multiple dedications, to Hera, Zeus and an unknown third deity, which could have been Demeter, Kore or Athena.

An altar to the E. of the temple and nearby consecrated pits, bothroi, for the residue of the offerings, were used for the public ceremonies of the cult.

There are no traces of reinforcements of the floor where the cult statue should have been, so it has probably been made of wood and/or terracotta.

The cult at the temple ended with the decline of Paestum in the 4th century.