Daughter of Augustus and Scribonia, wife of Agrippa and Tiberius

Julia (39 BCE – 14 CE, aka Julia the Elder) was the daughter of Augustus and his first wife Scribonia. 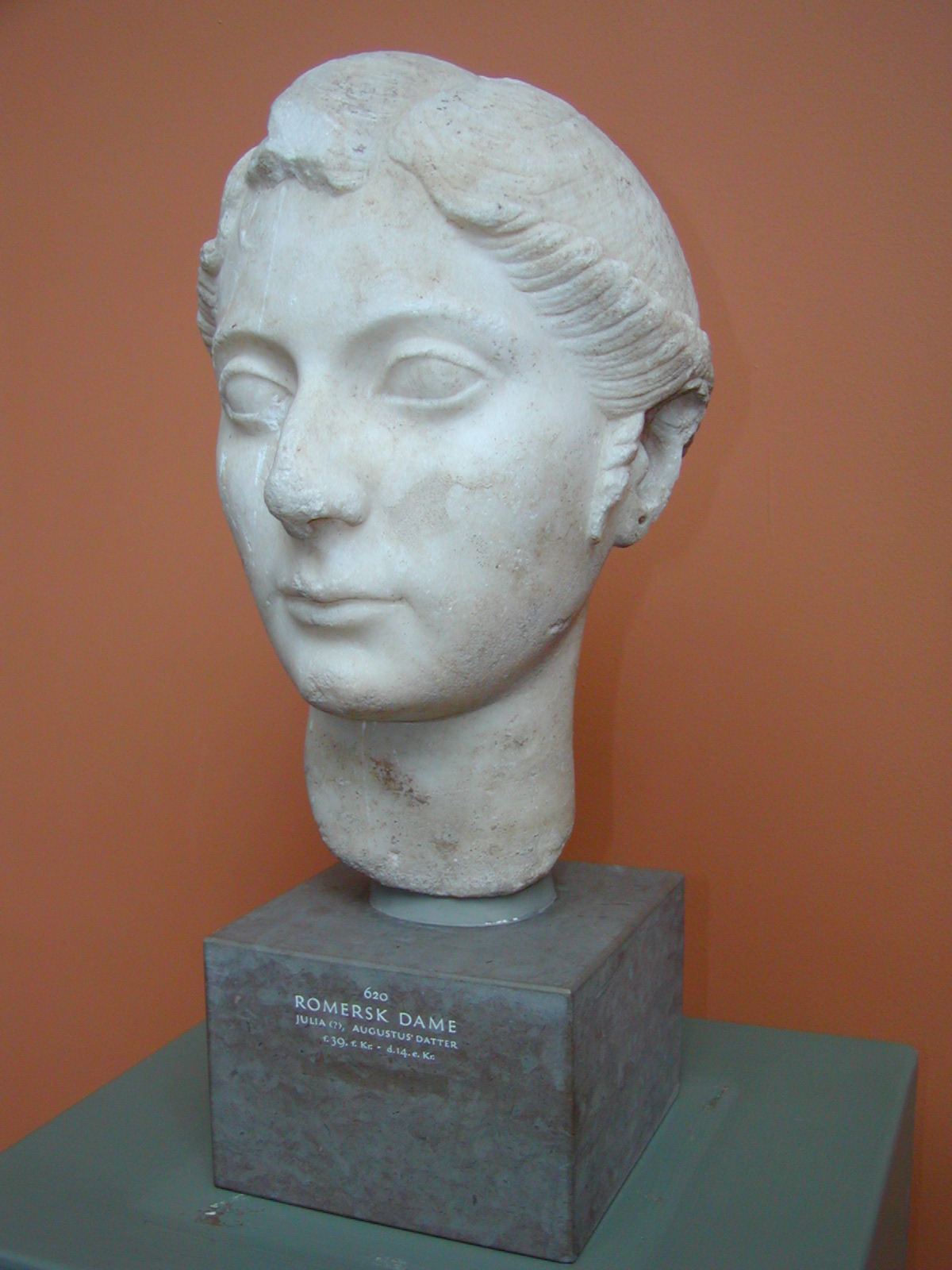 Julia, being the only natural offspring of Augustus, played a central role in Augustus’ dynastic policies. Throughout her life she would be married to successive heirs, some of whom had been forced to divorce their wifes to marry her.

At the age of 14 where was married to her cousin Marcus Claudius Marcellus (son of Augustus‘ sister Octavia), who Augustus had designated as his heir, but Marcellus died in 23 BCE, and Julia was widowed at the age of 16. They had no children.

Two years after, at the age of 18, she was married to the next heir designate, Augustus’ trusted friend Marcus Vipsanius Agrippa. They were married until Agrippa’s death in 12 BC and had five children: Gaius (Caesar), Vipsania Julia, Lucius (Caesar), Agrippina (the Elder) and Agrippa Postumus.

After the death of Agrippa, Augustus settled for Tiberius as his successor, and in 11 BCE Julia was married to him. Their marriage was an unhappy one. In 10 BCE they had a son that died soon after and in 6 BCE Tiberius retires to Rhodes causing the fury of Augustus.

Julia had numerous lovers, both while married to Agrippa and when married to Tiberius, and led a lavish lifestyle. When the semblance of her five children to Agrippa was noted, she is said to have responded, that she “only took on passengers when she had a full cargo”, meaning she only took lovers when she was already pregnant as to not jeopardise her fathers dynastic plans. Her promiscuous life was possibly one of the reasons for Tiberius’ escape to Rhodes.

In 2 BCE Julia’s lifestyle and the gossip it caused became too much for Augustus. He had embarked on a policy of re-moralisation of Roman society, which was endangered by the rumours of her daughter’s immoral habits, and his plans of succession would be put at risk if the legitimacy of her children could be questioned.

Augustus had the issue of her adultery brought to the senate, then forced Tiberius to divorce her and at last sent her into exile on a small island called Pandataria. Her mother Scribonia went there with her. Five years later she was permitted to stay at Rhegium (now Reggio Calabria).

Tiberius became emperor at the death of Augustus in 14 CE. He immediately cut her allowance, and Julia died later that year, according to Tacitus of starvation.